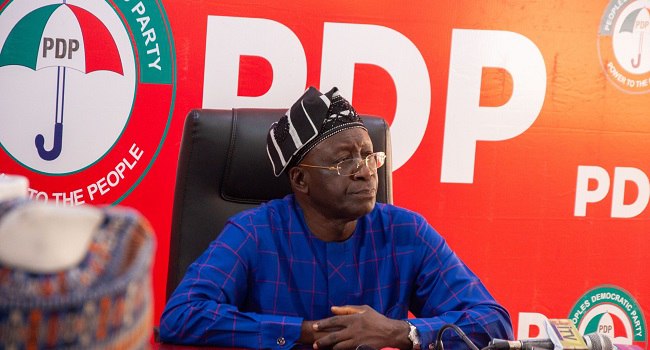 Iyorchia Ayu, the national chairman of the Peoples Democratic Party (PDP), stated on Monday that there is no party crisis and that new members who are not currently participating in the party’s election campaign are welcome to join.

He claims that the party’s main objective is to unseat the All Progressives Congress (APC), which is currently in power, in the general election of 2023.

According to information obtained by Anaedoonline.ng, Ayu stated that there is no crisis in the PDP and that those who are not on the train should get on it. He made this statement while addressing in the Benue Community in Kaduna.

The national chairman of the PDP urged the community of Benue in Kaduna to work together more for the party in the run-up to the 2023 elections.

“I am grateful that within few hours of notice, the Benue community in Kaduna has come out in such large numbers to receive me, it shows your passion for me and the PDP as the largest political party in West Africa,” said Ayu, who was present with the PDP governorship standard bearer for Kaduna State, Ashiru Kudan, and the former Senate President, Liyel Imoke.

“The leadership of the PDP will ensure a clementine environment for all people to operate. All of you that dwell in Kaduna among other citizens are indeed indigenes of Kaduna State and must rally around the PDP gubernatorial candidate.

“I hand over Ashiru to you and at the same time hand over you to Ashiru, you must work together for victory next year and I’m sure he will appreciate your support with appointments,” Ayu remarked.

PDP Forum Pass Vote of No Confidence On Ayu, Others Gives Them 48hrs To Resign

The PDP’s vice presidential candidate, Governor Ifeanyi Okowa, was also present in the village with them. He thanked the locals for their hospitality and said the PDP had made enormous strides since 1999, adding that the party hoped to revitalize those lost years of production.

The leadership style of their son, Iyorchia Ayu, impressed Paul Wachihi, President of the Benue Community in Kaduna.

According to Wachihi, the Benue Community in Kaduna is strongly supporting the PDP and Ayu’s leadership to free Nigeria from the myriad of problems being faced by the entire nation.

“The mammoth crowd you see here is an indication of the Benue community’s resolution to work with our son, we have faith in his capabilities and we are happy to receive him,” Wachihi said.

86 Drones Confiscated By Customs Given To Navy

2023: Atiku To Face Northern Elders, ACF, Others In Kaduna