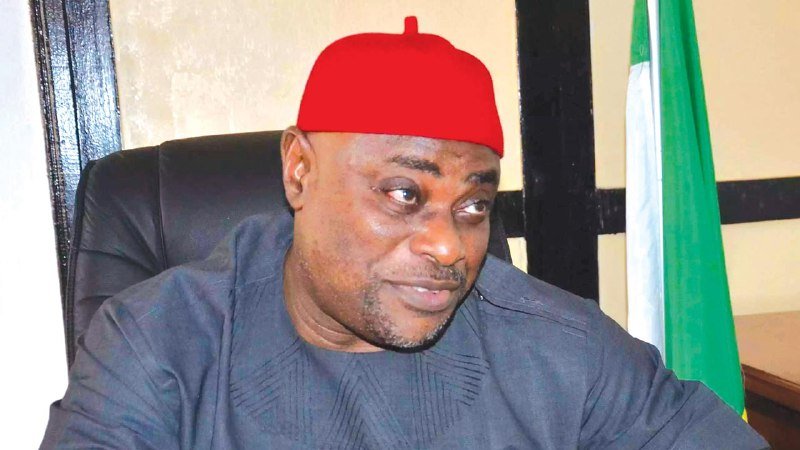 Victor Oye, National Chairman of the All Progressives Grand Alliance (APGA), has boasted that his party will win Nigeria’s presidential election in 2023.

Many people may question how it will happen, but only God knows who will win the election, and he is confident that God will not desert his party in their hour of need.

During a press conference in Abuja on Friday, Oye revealed that the APGA has 1.5 million registered members but many more supporters who are not card-carrying members of the party.

He contended that political parties boasting about having 15 million members are lying since no single party can have that many registered members.

The APGA Chairman, therefore, submitted that with the help of God and the party loyalists, they will win the 2023 elections, adding that APGA is not a local party.

In his words, “APGA is not a local party. We are going to win the election in 2023. You will see it. I know you would be wondering how it’s going to happen. Don’t forget that it is God that makes kings. Whoever has the anointing to become president, God will make him president of Nigeria.”

“No man can decide for God who will rule Nigeria. It’s only God that will decide it. Did anybody anticipate that Buhari was going to win in 2015? He won and won a second term. Today, he’s almost completing his tenure. Let Nigerians begin to appreciate the awesomeness of God.

“The God we serve is a living God. All my hope and trust is in Him. What God cannot do for me, let it be. God has taken me so far to where I am today. We have led the party with passion and love, and God has been propitious to our supplications. He will never abandon us in our hour of need.”

The APGA chairman stated that it is impossible for any political party to have 15 million card-carrying members, and that his organization does not make false claims.

He revealed that the APGA has only 1.5 million registered members and that parties claiming 15 million are simply lying

“I can tell you that no political party in Nigeria has 15 million members. Show me the evidence. It’s not possible. By the way, I gave 1.5 million members. Did you know the admirers, the supporters of the party? That is how elections are won.

“Elections are not won by membership of the party on records or registers. There are people who believe that, on that day, they will vote for this particular candidate, irrespective of affiliation.

“So, forget figures. I just gave you the correct figures of what is in our register. I would have told you we have 20 million followers, which others claim, but I won’t do that. We stand for the truth and it’s only the truth that can set you free.”

Oye went on to say that he, not Edozie Njoku, is the true National Chairman of the APGA.

He stated that the Supreme Court rejected Njoku’s claim to the party’s National Chairmanship seat and challenged him to provide the report from the Independent National Electoral Commission (INEC) that monitored his factional convention, if he had it.

He stated that the Supreme Court’s conclusion was that “this matter is dismissed.”

He went on to say that Njoku should “bring us the INEC Monitoring Committee report on his alleged convention.”

Twitter Suffers $4 Million Loss As A Result Of Enormous Workforce –...