Tinubu Tackles Atiku, Obi, Accuses Them of Sponsoring Fake News Against Him 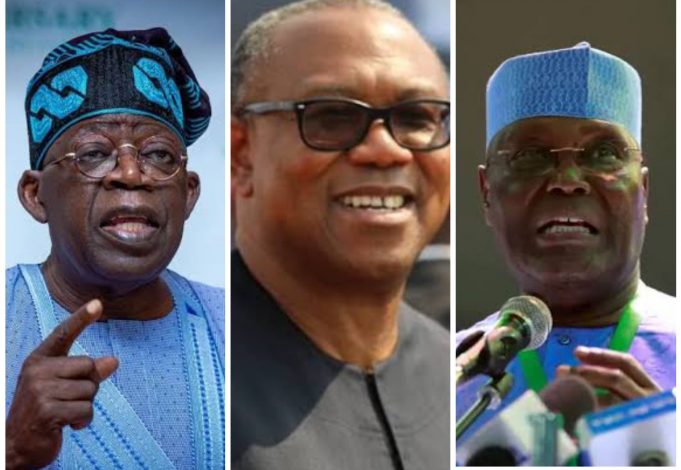 Asiwaju Bola Tinubu, presidential candidate of the All Progressives Congress, APC, has warned the candidates of the Peoples Democratic Party, PDP, Alhaji Atiku Abubakar, and the Labour Party, LP, Mr Peter Obi, against sponsoring fake news to malign his reputation, saying such actions would not help their ambitions.

Mr Bayo Onanuga, Director of Media and Publicity for the APC Presidential Campaign Council, claimed in a statement on Sunday that both opposition candidates were guilty for promoting fake news against Tinubu.

He said: “The opposition Peoples Democratic Party and its subsidiary, Labour Party, having realised they have no sure path to victory in the February 2023 presidential election, upped their campaign of calumny, disinformation and misinformation on Saturday by sponsoring fake news against the All Progressives Congress presidential candidate, Asiwaju Bola Ahmed Tinubu.

“They did it by forging the letterhead of the Independent National Electoral Commission, INEC, and the signature of its national commissioner, Festus Okoye,” said Onanuga.

According to the APC campaign team, the falsified INEC statement was spread to mislead the unsuspecting people into believing that INEC was investigating charges against Asiwaju Tinubu.

“They desperately hoped it will ultimately lead to the disqualification of the frontline APC Presidential candidate.”

The ruling party also called on the Police to investigate those behind the fake statement and get them to face the wrath of the law.

“We are not in any way surprised by the antics of the sinking opposition parties.

“What we found shocking was how quickly some compromised media organisations gulped the falsehood, hook, line and sinker, without attempting to verify.

“We understand why they did so: the forgery and its narrative fit their mindset of throwing overboard every known virtue of ethical journalism and professionalism, as they work in cahoot with the opposition to defame Asiwaju Tinubu.

“This inglorious path has been taken before since 2003 and in the run-up to the primaries of the ruling APC that produced Asiwaju Tinubu as the presidential torch bearer.

“Those who took this damned path of infamy lost their bet because Asiwaju Tinubu stands rock solid and indestructible,” the statement added.

The APC campaign committee stated that its candidate has continuously stated that he will campaign on issues that affect Nigerians’ lives and how to deliver realistic and long-term solutions that will improve people’s quality of life.

“He has demonstrated this resolve by publishing an 80-page manifesto tagged Action Plan for a Better Nigeria, which he has been selling to strategic sectoral groups in the country.

“We had hoped anyone aspiring to lead our country at this time will be a natural subscriber to this noble and higher goal.

“It is clear the opposition parties and purveyors of fake news have other negative ideas: they want to make this election cycle more about muckraking and mudslinging.

“While we want to stay above the fray and stand by our commitment to inspire our people and restore their faith and confidence in the immense goodness and greatness of our country, we want to serve notice to all the agents of disinformation and their collaborating media platforms, that our campaign organisation stands ready to confront and fight all libellous and defamatory publications against Asiwaju Bola Ahmed Tinubu.

“We shall no longer allow the prevailing recklessness and utter disregard for professional judgment to continue unchallenged.

“We also call on the police to investigate the circulation of the forged INEC statement and serve justice to those responsible,” he added.

‘Buhari Gets Paid Even While In London’ – Shehu Sani Blasts FG...