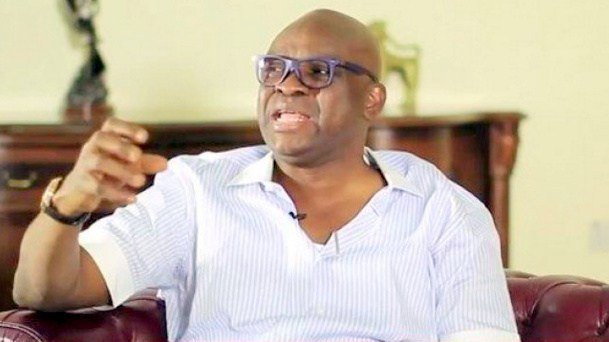 Even though they are in opposing camps ahead of next year’s election, Ayo Fayose insists he would not stoop to criticizing All Progressives Congress (APC) presidential candidate Bola Tinubu.

Fayose, a member of the main opposition Peoples Democratic Party (PDP), made the remark on Channels Television’s Politics Today on Thursday.

“Let me tell you: if people are expecting me to abuse Tinubu to show that I am not supporting him, I would not do that,” he said during the show.

2023: Igbos Are Responsible For Pushing Peter Obi Down – Isaac Fayose

He labeled Tinubu as a Yoruba leader, and as such, he will not disparage the former Lagos State governor, despite their political differences. Fayose stated that he holds PDP presidential candidate Atiku Abubakar in the same regard as the APC head.

“If the only way to demonstrate to everybody that I am Bola Tinubu’s enemy is to come out as a Yoruba man and insult Bola Tinubu, I will never do it,” he added.

“Listen to me, Atiku Abubakar and Bola Tinubu are over 70 years old leaders, why were they sitting together to rub minds and did not carry cutlasses against it each other? Count me out of that (insulting Tinubu).”

The PDP chairman also restated his position on power transferring to the country’s south.
According to him, because President Buhari is going to finish his second term and is from the northern region, the southern section of the country should produce Nigeria’s next president.

While he is an ally of Wike, who has been at odds with the PDP since the party’s presidential primaries, Fayose has stated that he will continue to work for the party.