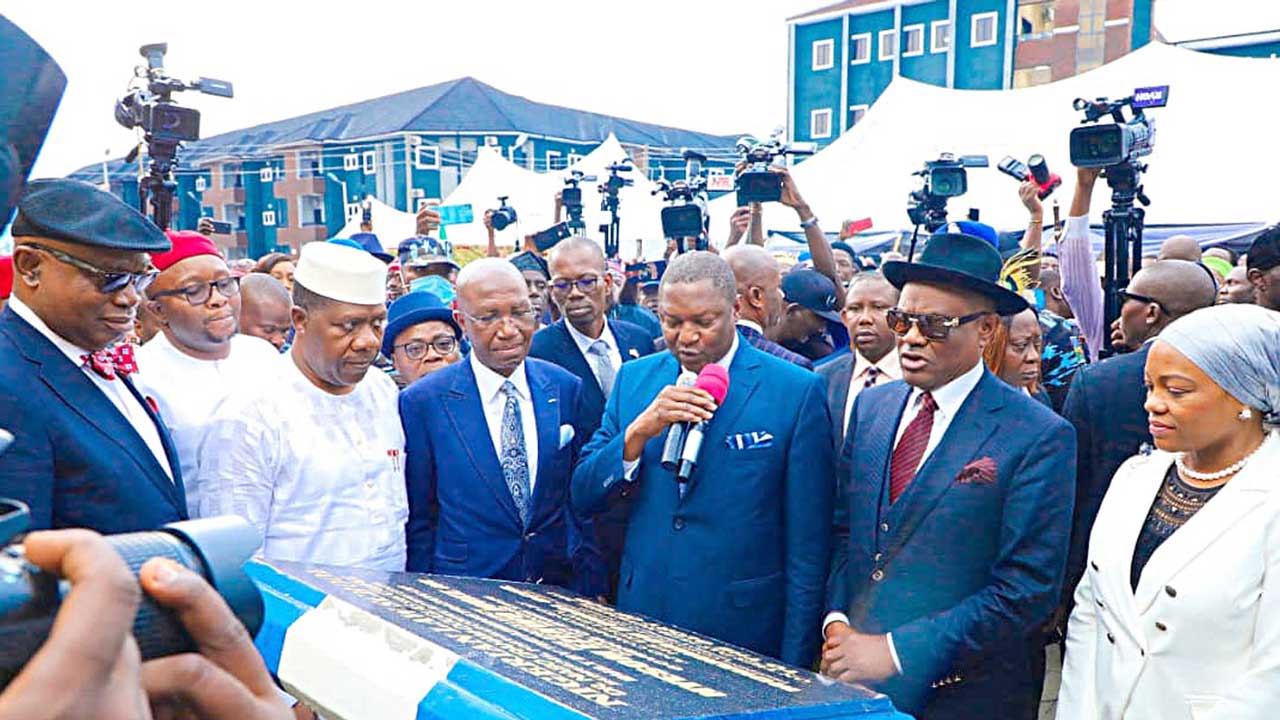 President Muhammadu Buhari has hailed the Nigerian Law School’s Dr. Nabo Graham-Douglas Campus, which was built, outfitted, and handed over by the administration of Governor Nyesom Ezenwo Wike, as a “great wonder” designed to be self-sustaining.
The President has also stated his approval and direction that the improved wage and welfare package for judicial officers be implemented immediately.

President Buhari described the project, which was inaugurated yesterday in Port Harcourt, as an enduring testament to Governor Wike’s commitment to the promotion of law and development in Rivers State and beyond.

“I need not engage in poetic verbosity to properly describe the grand wonder that is being commissioned today. The icing on the cake is the fact that this edifice and its state-of-the-art facilities are structured to be self-sustaining through, associated revenue earners, as designed by a man of higher vision who is now fondly referred to as Mr Project,” said the President, who was represented by the Attorney General of the Federation and Minister of Justice, Abubakar Malami (SAN).

According to him, he was aware that Wike extended development initiatives to the neighbouring Bayelsa State by executing multi-billion-naira projects that included a 900-bed space hostel and 1,500-capacity auditorium in the Yenagoa Campus of the Nigerian Law School.
This, he noted, was in addition to the provision of critical infrastructure support extended to federal courts in Rivers State, over the years.

“These are indeed pace-setting and unparalleled contributions by a state government to what is ordinarily under the remit of the Federal Government.

“Governor Wike’s dedication to these projects is better appreciated from the viewpoint of his being an unrelenting advocate of true federalism in Nigeria,” he added.

Buhari said the resultant effects of the governor’s sterling efforts have continued to strengthen the rule of law and national development.
He commended Wike’s good heart and statesmanship on behalf of the entire justice family and lovers of justice in Nigeria.

“Indeed, our dear nation needs more of such unifying efforts. It is in recognition of the foregoing that my administration discarded political considerations and acknowledged excellence by conferring Governor Wike with the Nigerian Excellence Award in Public Service, in October 2022, for his unprecedented leadership role in the delivery of legacy infrastructural projects in Rivers State and beyond.

Your Excellency, you have indeed immortalised yourself and history will be kind to you,” he added.

He reiterated that the ceremony served as an avenue for them to be reminded of the need to promote cooperation and understanding between the federal and state governments in the overall national interest and the welfare of all Nigerians.

On the issue of enhanced salary and welfare scheme for judicial officers, Buhari said he has directed the Chairman, Revenue Mobilisation and Fiscal Allocation Commission and the Minister of Justice to promptly commence measures towards the realisation and implementation of the enhanced welfare scheme across the country.

“The initiatives were targeted at significantly strengthening the capacity and independence of the judiciary, which he said remained a pillar of strength and stability for the nation’s democracy.

“This administration will continue to support efforts to transform the judiciary, as part of a critical strategy, in ensuring a fair, progressive and prosperous society, with the rule of law as its cornerstone,” he said.

He, therefore, called on the judiciary to continue to uphold the ethics of their profession and operate with accountability and probity in the exercise of their judicial and administrative duties.
He equally charged the Council of Legal Education to sustain the trust by optimally maintaining and running the project in furtherance of the quest to improve and sustain high standards in legal education.

“The legal profession thrives on sound learning, ethical values and good character. Therefore, it is our abiding duty to sustain high standards for those on whose shoulders rest the future of both the bar and the bench,’’ he added.

In his speech, Wike said that sequel to his request for approval to build a law campus in Port Harcourt and subsequent approval given, he was most delighted to have delivered the facility, completed within 10 months.

He stated that the contract for the project was awarded to indigenous contractors, who handled each of the structures under strict supervision, costing the state government about N17 billion.
Wike revealed that one of the reasons his administration has been able to embark on several projects was because President Buhari had graciously approved the payment and release of unpaid 13 per cent derivation deductions since 1999 to all states in the Niger Delta.

In his good will message, President of the Nigerian Bar Association, Yakubu Maikyau (SAN), described Wike as a true leader who has shown excellence in governance and deliberately invested in the legal profession that would serve the course of justice to the people.

Speaking for the Benchers, Chief Wole Olanipekun, noted that there was no legal professional that has contributed as much Wike has done to the promotion of legal practice in Nigeria.

In his speech, Chairman of the Senate Committee on Judiciary, Human Rights and Legal Matters, Senator Michael Opeyemi Bamidele, who described the day as epochal for the legal profession, decried the inability of the National Assembly and other stakeholders to enact a new Legal Practitioners’ Act that should make the legal practice of international standard in the country.

Also speaking, the Chairman, Council of Legal Education, Chief Nnaemeka Ngige, conveyed the appreciation of the council over the enthusiasm and cooperation of the government and people of Rivers State in the delivery of a landmark project that would serve to benefit the development of Nigeria.

He assured that legal education activities would commence at the law campus fully, describing the facility as a model to use by any person or government when establishing law campuses in the county.

On his part, Rivers State Commissioner for Works, Dr. George-Kelly Dakorinima Alabo, said the site, once occupied by the state’s School of Nursing, overtime became swampy, which was the situation when the civil work on the law school campus started.

In his address, the Rivers State Attorney General and Commissioner for Justice, Prof. Zacchaeus Adangor recalled that on June 4, 2021, during the flag off of the construction of modern facilities at the Yanagoa law school in Bayelsa State, Wike requested for a law campus in Port Harcourt.

He noted that the request was eventually granted with approval from the Federal government and council of legal education, which necessitated the laying of the foundation stone on June 17, 2021.

I Spent N1m, Sleeping With Two Prostitutes Daily, For One Month – Kidnap Suspect