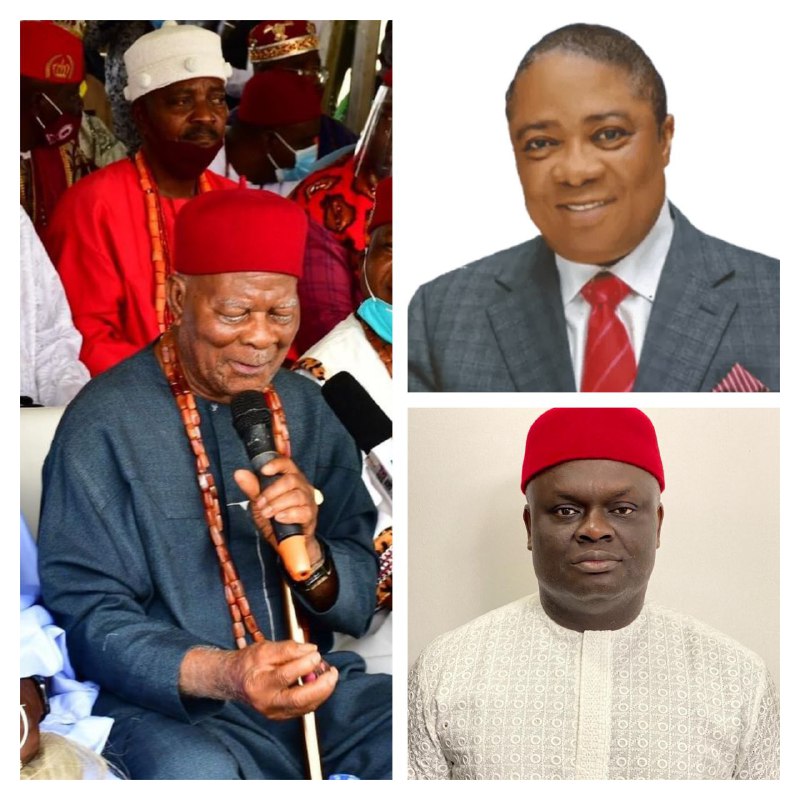 The family of Chief Oliver Nwagbala has deemed it fit to respond to some fictitious allegations being peddled against his family and personality bothering on ownership of some parcels of land situated at the Nkwo Nnewi Triangle and which was demolished by the State Government.

Recall that yesterday Sunday November 20th and today November 21st 2022, some local blogs based in Nnewi Anambra State published a news report that there was a contention between Nigerian Business Mogul, Chief Cletus Ibeto CON and The Igwe of Nnewi on the ownership of the Nkwo Nnewi Triangle.

However, speaking on the development when contacted by AnaedoOnline, Ezeani Chukwunonso Elvis; SSA on Public Affairs to Chief Dr. Cletus Madubugwu Ibeto; OON, CON said that “what transpired at the palace was a stakeholders meeting and at no time was there rancor or an order banning anyone from accessing any part of Nnewi because a father cannot stop a well deserving son from stepping foot on certain parts of His house; the story is the work of merchants of fake news.”

Speaking further on the issue of the right of access to the portion of land popularly called “Nkwo Triangle”, Ezeani said that “there are some portions of private properties along Nkwo Nnewi Triangle along old onitsha- owerri road which has always been the property of a family and was a subject of litigation, initiated by that family – the Nwagbala family of Uruagu Nnewi, against the Anambra State Government, Nnewi North LGA and other state government agencies due to what they perceived to be an attempt by the then government of Anambra State to disposes them of their asset. As at now, every shred of available evidence including certified true copies of court judgements (not appealed by government) fully vests the ownership title of the portions of land on the Chief Oliver Nwagbaa family and no one else – individual, community or government.”

“There is no known subsisting contest as to ownership of the land hence Chief Dr. Cletus Madubugwu Ibeto; OON, CON currently has absolutely no debate with Nnewi as a town, any individual, organization or government institution regarding ownership of the said land.”

DR. CLETUS IBETO; CON: AN INSTITUTION THAT HAS PASSED THE TEST OF TRUISM

See below the authorized Press Statement from Chief Oliver Nwagbala exclusively given to Anaedoonline.

My attention has been drawn to false and misleading reports concorted by mischief agents on Nkwo Nnewi Triangles. It’s pertinent and for record purposes to state the following facts:

1. Nnewi Triangle comprises of big portions of land owned by Nnewi community (which ownership is not in doubt) and few private properties owned by Chief Oliver Nwagbala, upstair building at round-about owned by Chief Edmund Ngonadi(Edmack) and another portion owned by Chief JCN Ikejiuba(Ikeoil) situated along old onitsha – owerri road.

2. For the purpose of clarity, the private properties in this regards are portions of lands housing *Total petrol stations, Dacon petrol stations( formerly Texaco owned by Mr David Onedibe, he’s still alive) DHL office, Federal Mortgage Banks etc* all of which are well known by any grown-up in Nnewi. Let’s cast our memories back to these developed properties before Government’s demolition in 2012 .

Ownership of few private properties at borderlines by Chief Oliver Nwagbala has never been in contest.

3. Recall, during the burial of late Dim Odumegwu Ojukwu, Anambra State Government, cleared and demolished illegal shops in and around Nkwo Nnewi Triangle without tampering with the private properties aforementioned which they demolished months later to commence the construction of a shopping mall.
Consequently, in 2012, owners of the private portions, Nnewi community and Chief Oliver Nwagbala independently sued Anambra State Government, Nnewi North LG under the Chairmanship of Mr Patrick Ubajaka and Anambra State Urban Development Board ( ASUDEB), while Chief Agu Onyeka was PG Nzuko Ora Nnewi .
It may interest you to note that we share same lawyer with Nnewi community in the person of Chief Bar. Olisaeloka Osuigwe since our boundaries are known and properly established. In 2020 (8 years later), a government owned High Court, after reviewing documented evidence of ownership, pronounced a judgement in our favour, effectively ordered the possession of our private portions by its owner–Chief Oliver Nwagbala.
This is a court judgement verifiable by the public. For emphasis, this is independent of the suit filled between Nnewi community and Anambra State Government by our same lawyer since our portions are well-known and has never been in dispute whatsoever.

4. The private portion under current development by Chief Dr. Cletus Ibeto should not be mixed up or confused as portions belonging to Nnewi community. And it’s within his rights to commence development since the property in question has already been sold to him.
Chief Dr. Cletus Ibeto (Omekannaya) is a selfless, straight-forward and distinguished son of Nnewi who is known to stand on the side of truth and justice.

As a stakeholder present in the meeting at Igwe Nnewi’s Palace, it was a peaceful and cordial parley as *THERE WAS NEVER A TIME CHIEF DR CLETUS IBETO INSULTED OUR IGWE* as being propagated by mischief agents. We hereby advise mischief agents and journalists to always engage in investigative journalism and desist from malicious publications and character assassination.

5. In the recent parley with Nnewi community, ownership of the private properties was never in doubt except for unsubstantiated and false claim by one Mr Edwin Ibeanu(Who claims to be the only person alive in such purported agreement) that the private portions belonging to Chief Oliver Nwagbala was sold to Nnewi community in 1956 (by his submission, the Original owner is Nwagbala family but claims purchase by Nnewi without any documented evidence). There is *NO* documented evidence or record with regards to such unfounded transaction either with Nnewi community or with Nwagbala family. *It simply doesn’t exist* .

6. It’s noteworthy that there were established buildings in Dacon filling stations and Total petrol stations, etc (owners still alive) whose owners pay rents to their landlord, Chief Oliver Nwagbala until the demolition by the government. This begs the question : How can one claim purchase of land since 1956 (66 years ago) without title documents or evidence while Nwagbala family have total control including erection of buildings and collections of rents without any form of hindrance? No past PG of Nzuko Ora Nnewi (both dead or alive) or representatives of Nnewi or Government Agencies have ever claimed ownership or collected rents from those private properties before government’s demolition. So why sudden claim and misinformation?.

7. Again, we want to remind the public and to underscore the fact that, *the piece of land housing Dacon filling stations( formerly Texaco) , Total filling stations etc is a separate private portions, separate from portions owned by Nnewi community .* That Anambra State illegally demolished our properties to construct a shopping mall doesn’t mean it has automatically become Nnewi community’s land after we have regained possession.

Actor Tony Umez Calls Out Old Politicians Ahead of 2023 Elections