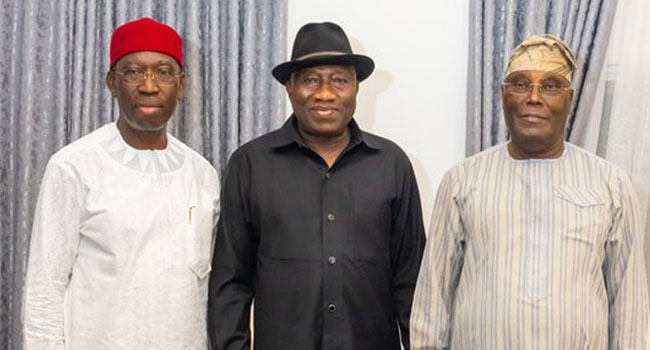 The Peoples Democratic Party’s (PDP) presidential candidate, Atiku Abubakar, has been unable to persuade Goodluck Jonathan to assist him in resolving the party’s problem.

As a result of Jonathan’s indifference to the PDP conflict and the presidential campaign in general, Atiku and his running partner, Ifeanyi Okowa, paid Jonathan a “peace mission” on the evening of November 17.

Jonathan, who was elected vice president in 2007 and president in 2011 on the PDP platform, had been a party backbencher since losing re-election in 2015.

According to sources acquainted with the Thursday night conversation, Atiku told Jonathan that he was concerned that the former president had not been participating in PDP affairs as the presidential election approached.

“He implored Jonathan to intervene in the face-off with PDP governors who are sympathetic to Nyesom Wike, the governor of Rivers state,” sources said.

Wike has declined to support Atiku’s presidential campaign due to his camp’s insistence that Iyorchia Ayu resign as national chairman, as promised by Atiku himself.

Atiku and Ayu are from the country’s north, and it is understood that the president and the party’s national chairman should not be from the same region.

However, the Atiku camp believes that the current arrangement should be maintained until a president is elected.

Sources told Newsmen that Jonathan believes the party, particularly Atiku, has not shown him any respect.

“Dr Jonathan has never been invited to the meeting of the Board of Trustees,” one of the sources said.

“The party has never accorded him the respect of involving him in its activities. Now that presidential election is close by, Dr Jonathan has suddenly become important.”

During his 2019 presidential campaign, Atiku reportedly told Jonathan that he had his full support, but the candidate stopped returning his calls once he got the ticket.

“More so, those nominated by Dr Jonathan into the 2019 presidential campaign council were not appointed. Not a single nominee of his was picked,” the source added.

According to reports, Atiku stated that he was ignorant of Jonathan’s complaints and that he would bring them up with the party’s leadership.

The presidential contender was also reminded of his role in the All Progressives Congress (APC) displacing the Peoples Democratic Party (PDP) from power in 2015.

In November 2013, Atiku and five other PDP governors stormed out of the PDP national convention.

They then joined forces with three other opposition parties to form the APC.

“Atiku is facing a similar rebellion now and he now wants the same Dr Jonathan who was a victim of his own machination to help him resolve the crisis,” the source said.

Jonathan met with Atiku at the Dorchester Hotel in London in 2014 to seek his assistance in resolving the PDP crisis, but Atiku reportedly stated that the only condition for peace was for Jonathan to withdraw from the presidential race.

2023: The Only Reason I Will Borrow If I Become The President – Peter Obi