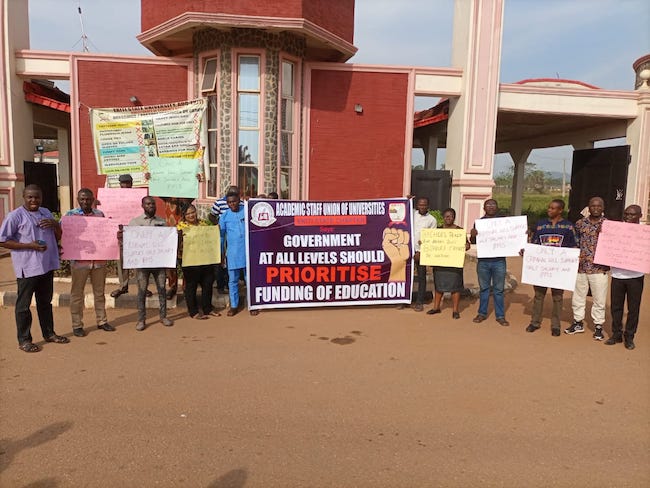 Arogundade, who also named Labour Minister Dr Chris Ngige and Education Minister Adamu Adamu as accomplices, stated that Nigerians were waiting for the agenda to hatch, urging citizens to force the Federal Government to do the necessary for the education sector and university lecturers in order to avoid another round of strike action.

The ASUU chairman stated during a demonstration by ASUU-EKSU members in Ado Ekiti to voice dissatisfaction with the Federal Government’s “no-work-no-pay policy and payment of half salary to university teachers.”

Among inscriptions on the placards of the protesting ASUU-EKSU members are “Only a criminal will support half salary and IPPIS”, “Teachers teach the nation, but Buhari cheats the nation”, and “ASUU-EKSU says government at all levels should prioritise funding of education”.
Arogundade said, “We are expressing our displeasure concerning the Federal Government’s draconian decision of no-work-no-pay introduced by Ngige and sanctioned by the FG. Our interest is that we are not casual workers, nobody is paying us wages, what we are getting is salaries”.

According to him, it is criminal for anybody to think of imposing no-work-no-pay to the extent of paying half salary because people decide to agitate for their rights and demands.

“I am of the opinion that Ngige, Adamu and Buhari have an agenda that is not known to Nigerians, we are just waiting patiently to see when they will hatch that agenda. If they don’t have agenda, the three of them cannot sleep and be facing the same direction that leads to nowhere. I know the agenda cannot be in the general interest of Nigerians.

“Our understanding is that if they have their children around here, they will not be treating Nigerian universities and lecturers this way. The only thing they are doing is that they want to pitch us against the students in a way that we get disillusioned and the students will be discouraged in the educational system.
“We are appealing to all Nigerians to speak to the Federal Government that they should not wait for us to start another round of action. We are getting used to it, you have not paid us for eight months this year, we are not dead, we are still alive, so government should not push us to a state whereby we become so adamant to the extent that we don’t care whatever happens,” he said.