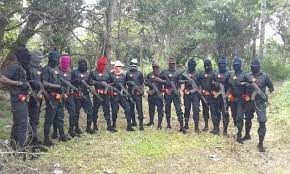 According to the Indigenous People of Biafra (IPOB), villages in Enugu State that have been subjected to a series of attacks purportedly carried out by Fulani militias are suffering the consequences of pushing operatives of the Eastern Security Network (ESN) away from their territories.

According to a statement published by IPOB’s Media and Publicity Secretary, Emma Powerful, the vulnerable villages, particularly Agu-Amede and Eha-Amufu in the state’s Isi-Uzo Local Government Area, employed the Nigerian army and police to drive out ESN operatives who were guarding them.

ESN is the militant wing of IPOB, a separatist movement founded by Nnamdi Kanu that seeks the “emancipation” of the Igbo people of Southeast Nigeria.

According to IPOB, a traditional ruler, Igwe Christopher Nnamani, President General and Youth Leader of Eha-Amufu and its environs, assisted militiamen in killing residents of the area.

The organization accused the monarch and community leaders of collaborating with the Nigerian government to force ESN operatives out of their towns “in their desperate attempt to guarantee that Fulani takes over the communities and ESN operatives were driven out and Fulani came in to slaughter them.”

IPOB has vowed that ESN will not rescue them again because they “allowed Fulani terrorists to come.”

“Communities involved have recovered scores of dead bodies who were killed by Fulani jihadists and foot soldiers,” it said.

IPOB stated that any community that evicted ESN operatives should not expect them to return.

It said, “The Nigeria military and police have failed to respond because they are behind and in support of the attacks by the Fulani terrorists who are massacring innocent citizens of Enugu (Enugwu) State. We are not sure that they are not directly responsible for the massacres and mayhem witnessed by our people in ‘Enugwu Provence’.

“IPOB and ESN are not coming for them but let the Agendist and Nigeria army and police not blame ESN for not coming to the defense of our people in that area of our land. Our men in the communities were massacred in cold blood without any reason and we promise them that Fulani will take over there in no distant time, then that ESN will revenge their death whether NO way (sic) the Fulani terrorist military and police like to support Fulani to continue eliminating them.

“IPOB is making it open to ESN operatives not to move to these communities in Enugu State because we cannot afford to defend them while they don’t want us, Fulani must continue eliminating them because nobody is challenging them. Biafrans, you must ask the traditional ruler why they removed ESN from their place.”