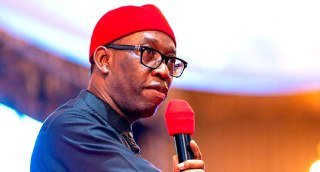 Gov. Ifeanyi Okowa of Delta, a vice presidential candidate for the Peoples Democratic Party (PDP), declared on Friday that God, not the G-5 governors, would choose Nigeria’s next leader.

When Okowa led the Delta PDP campaign train to the state’s Ndokwa East and Ndokwa West Local Government Areas, he made the statement in Aboh.

He stated his belief that the five governors will put the past in the rearview mirror and fight to ensure the PDP’s victory in the general elections in 2023.

“God has said it that we, the PDP, will win this election. Many things may be happening now and people may be asking what about the G-5 governors.

“These governors are our brothers; everybody is important. But what God has said will happen, nobody can change it.

“So even if some of them decide to support APC, some will still remain with us because there will be division among them.

“The real truth is that I have strong political eyes and I have observed that no matter what they do, PDP will win the forthcoming election, by the grace of God.

“It is only the power of God that can help us to win. So, no matter what the G-5 said that they would work with APC or any other party, we will win”,he said.

Okowa asked Nigerians to support the PDP by voting for the party in order to advance the nation’s goals.

“We all know that the candidate of APC is not good enough to be our president.

“Also we know that Labour Party is not going anywhere and we need to sweet talk the party supporters not to waste their votes.

“Those supporters wishing to vote for Labour Party are only indirectly helping APC and trying to reduce the vote of PDP.

“So, please go and plead with Labour Party supporters to return to PDP and join hands with us to change Nigeria for the better.

“We, the PDP, are ready to change the so-called previous change. Therefore, everyone should go and get his or her PVC,” he said.

Okowa urged the populace to launch a door-to-door and market-to-market campaign to persuade people to support the PDP’s rescue effort.

He claimed that Atiku and Okowa’s ticket would result in an unified Nigeria and a flourishing economy powered by the private sector.

Okowa continued by saying that the PDP would restructure the nation and provide funding for state and local governments to start projects.

Chief Sheriff Oborevwori, the party’s candidate for governor, pledged to finish Phases 3 and 4 of Ashaka Road as well as the Beneku Bridge if the Okowa administration was unable to.

He characterized Chief Monday Onyeme, his running mate, as a professional who would add his many years of expertise to the administration and was dependable, knowledgeable, and highly articulate.

Chief Kingsley Esiso, the PDP’s state chairman, gave flags to candidates and said that the party has answers for all of the problems facing the country.

“I am very happy because APC days are numbered and PDP is coming on a rescue mission to reset Nigeria.

“All over Delta state, our people are happy with the Atiku-Okowa ticket because since the creation of Nigeria no Deltan has ever come close to Aso Rock.

“But by the special grace of God and with your support, our dear governor will become the next Vice-President of the Federal Republic of Nigeria”,he said.

Chief Funkekeme Solomon, the state campaign council’s director general, thanked the populace for its commitments and pleaded with them to turn out in large numbers to vote for the PDP on election day.