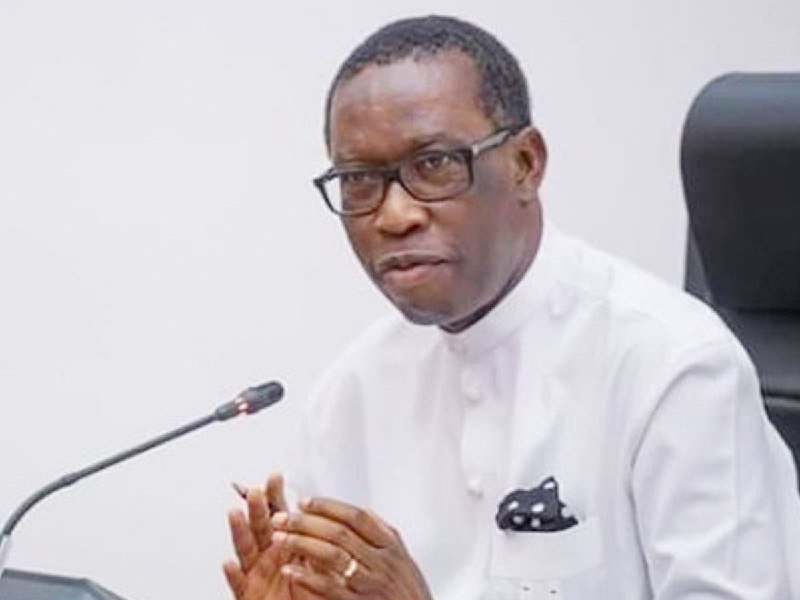 Sen. Dr. Ifeanyi Okowa, the governor of Delta and vice presidential candidate for the Peoples Democratic Party (PDP), issued a challenge to the residents of Delta on Tuesday to cast at least one million votes for the party in the next general elections.
Okowa asked the populace to cast their votes to make it a reality “for the welfare of all Deltans and Nigerians” and said that doing so would validate his selection as Alhaji Atiku Abubakar’s running partner.
During the party’s local government campaigns in the state’s Aniocha South and Aniocha North Local Government Areas, he delivered the charge at Ogwashi-Uku.

The governor said that his emergence was an act of God because he was at his home when he was chosen to become Vice-Presidential Candidate of the party.

“We have over 3.3 million registered voters in Delta and I challenge us to churn out over one million votes for our party to enable us deliver on our Rescue Nigeria mission.
“The more votes we bring from Delta, the bigger my voice will be in the party and the greater things we will witness in Delta and Nigeria.

“I know that we have won this election already but we need to up our numbers because God has endorsed our election and we are only waiting for the day to come and pass,” hesaid.

He urged the people to go back home and mobilise votes for the party, and affirmed that God had sanctioned the party’s victory at the polls.

“This election is a BIVAS election; so, it is quite different from what we have been having but I am optimistic that we have the numbers to win.

“Let us go back home and collect our Permanent Voter Cards and ensure that we reach out to all our people wherever they may be,” the governor stated.
On the governorship election, he disclosed how God revealed Oborevwori’s emergence to him, and charged the people to support him because God had endorsed him as a worthy successor.
“The emergence of Chief Sheriff Oborevwori as our party Governorship candidate is divine because God revealed his emergence to me and I can assure you that he is a very humble man who will be answerable and accountable to all our people.

“I have known Sheriff for over 30 years and I can assure you all that he is a good man and he will continue to unite Deltans.

“Since we came, God has helped us to continue to unite Deltans and he will continue with our programmes, policies and projects.

“So, let us cast our votes for the PDP candidates and vote out the APC because they have destroyed our unity and brought hunger and insecurity to our land.
“They said they have done their best but their best is not good enough. They have dug Nigeria into a hole but with the help of all of us Atiku-Okowa will bring Nigeria out of the pit,” Okowa stated.

On his part, the Governorship Candidate, Oborevwori, said he had a fine team, which was committed to the development of Delta and assured that he would not disappoint the Anioma nation.

“I have worked with our dear Governor and to have committed to supporting me, it means that I have passed the litmus test.

“I am a unifier and a pan-Deltan and we shall have an all-inclusive government with continuity for all ongoing projects, programmes and policies,” he stated.

2023: See What Atiku Said To Tinubu on His Emergence As APC Presidential Candidate

In his remarks, State Chairman of the party, Chief Kingsley Esiso, said that Nigerians were tired of galloping inflation, rising hunger and poverty and urged the people to punish APC with their votes.
“You are aware that in May, this year, Nigerians will have a new president that will promote the economy and ensure security of lives and property in the country.

“The ticket is a ticket for Delta because for the first time, the state would be producing the Vice-President of Nigeria,” he stated.

Director-General of the State Campaign Council, Chief Funkekeme Solomon, commended the people for their rousing reception and urged them to translate the support to votes in the elections.
At Issele-Uku, hundreds of ADC and APC members led by Chairman of ADC, Aniocha North, Mr Chris Ogwu and former APC chieftain, Mr Bolum Michael, defected to the PDP.

“We are back home to join the winning team; we have collapsed the structure of ADC in the LGA in all the wards to the PDP,” they stated.