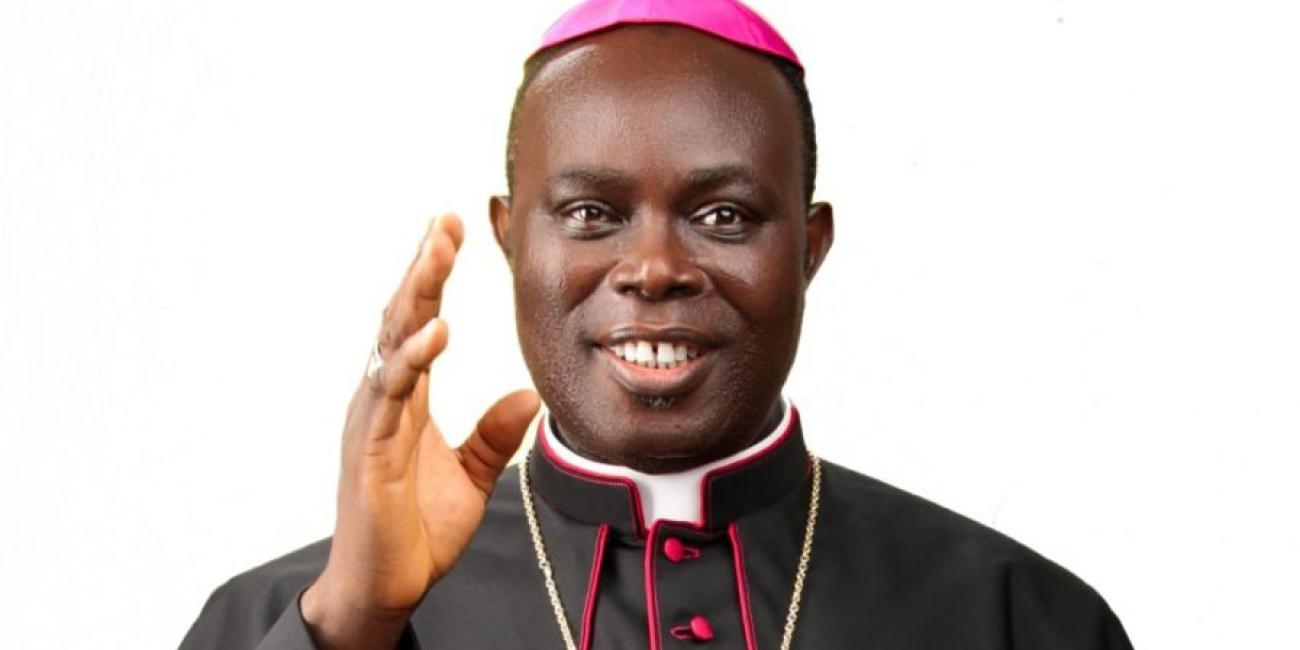 Governor David Umahi’s candidacy for the first state honors award in 2022 as Commander, Ebonyi Hall of Fame, was denied by the Catholic Bishop of the Abakaliki Diocese, Most Rev. Peter Chukwu (CEHF).

Chukwu was consecrated and installed as the Catholic Bishop of Abakaliki on August 6, 2022, replacing Most Rev. Michael Okoro, who retired as bishop due to age and was replaced as bishop by Chukwu on July 6, 2021, by Pope Francis.

Nwachukwu, who personally signed the letter to Governor Umahi rejecting the honor, encouraged the governor to give the honor to his predecessor, Most Rev. Michael Nnachi Okoro, in recognition of his lengthy and honorable service to God and humanity.

He advised Governor Umahi that instead of giving him an award, “I would prefer you set in motion, actions that would facilitate the termination of murder and sundry charges against my priest, Rev. Fr. Timothy Ngwuta.”

The letter sighted by Newsmen on Wednesday evening, and addressed to Governor David Nweze Umahi, was titled: “RE: Notification of your selection for the Maiden State of Honours AWARD 2022 as Commander, Ebonyi Hall of Fame (CEHF).”

It reads in part: “Compliments of the season and may the grace and peace of our Lord Jesus Christ be with you now and forever. Amen. 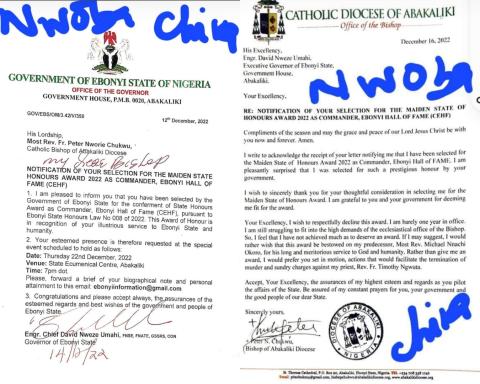 “I write to acknowledge the receipt of your letter notifying me that I have been selected for the Maiden State of Honours Award 2022 as Commander, Ebonyi Hall of FAME. I am pleasantly surprised that I was selected for such a prestigious honour by your government.

“I wish to sincerely thank you for your thoughtful consideration in selecting me for the Maiden State of Honours Award. I am grateful to you and your government for deeming me fit for the award.

“Your Excellency, I wish to respectfully decline this award. I am barely one year in office. I am still struggling to fit into the high demands of the ecclesiastical office of the Bishop.

“So, I feel that I have not achieved much as to deserve an award. If I may suggest, I would rather wish that this award be bestowed on my predecessor, Most Rev. Michael Nnachi Okoro, for his long and meritorious service to God and humanity. Rather than give me an award, I would prefer you set in motion, actions that would facilitate the termination of murder and sundry charges against my priest, Rev. Fr. Timothy Ngwuta.”

“Accept, Your Excellency, the assurances of my highest esteem and regards as you pilot the affairs of the State. Be assured of my constant prayers for you, your government and the good people of our dear State,” it adds.

Meanwhile, Governor Umahi’s nomination letter, which he also personally signed, marked GOV/EBS/OM/3.42/V/350, and addressed to the bishop was titled: “Notification of your selection for the maiden state honours award 2022 as Commander, Ebonyi Hall Of fame (CEHF).”

The letter reads, “I am pleased to inform you that you have been selected by the Government of Ebonyi State for the conferment of State Honours Award as Commander, Ebonyi Hall of Fame (CEHF), pursuant to Ebonyi State Honours Law No 008 of 2022. This Award of Honour is in recognition of your illustrious service to Ebonyi State and humanity.

In response to the arrest and detention of Reverend Timothy Ngwuta in Abakaliki, the state government and the Catholic Diocese of Abakaliki have exchanged barbs.

Ngwuta had reportedly been unlawfully detained by security personnel in Ebonyi since 2021, according to news sources.

This occurs in the midst of the ongoing communal dispute between the Ezza-Effium and Effium people in the state’s Ohuakwu Local Government Area, which has claimed the lives of innocent people and destroyed property worth millions of naira since January 2021.

According to a source, the priest was detained and falsely accused of starting a long-running issue.

He claimed that Ngwuta was detained while visiting some of his parishioners who had been forced to leave their houses due to the turmoil.

“It was during one of these visits he was arrested and has since been detained without trial, nothing, an ordained Reverend Father for that matter,” the source said.

As he urged the state governor to swiftly order the priest’s release, he had highlighted that Ngwuta’s arrest had a political overtone.

The Catholic Church, Diocese of Abakaliki stated in April 2022 that the Executive Order prohibiting any court in the state from hearing cases relating to the Effium Crisis had hampered efforts to secure Ngwuta’s release on bail. The statement was signed by Fr. Matthew Uzoma Opoke, Chancellor, Catholic Diocese of Abakaliki.

In response, the state government warned the Catholic Church not to claim that the priest’s imprisonment in prison was caused by an Executive Order through the Attorney-General and Commissioner for Justice, Cletus Ofoke.