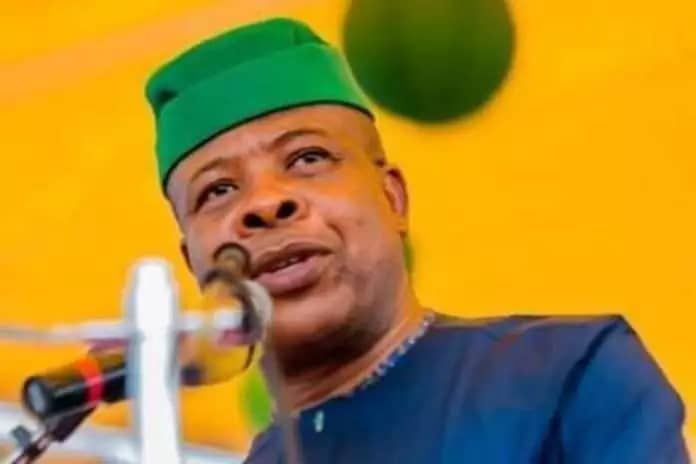 The Supreme Court ruled last Friday that the primary election that produced Jones Onyereri as the party’s Senatorial candidate for the February 25 National Assembly election was invalid.

In ruling on Nnamdi Ezeani’s appeal, Justice Emmanuel Agim concluded that the PDP breached Section 87 (9) of the Electoral Act by holding the primary outside the site specified by law.

The Supreme Court ruled that the election was held in Owerri, the Imo metropolis, rather than Orlu, the Senatorial center of Imo West.

Justice Agim reminded parties to always operate within the bounds of the law, emphasizing that the Electoral Act specifies how and where primary elections should be place.

The PDP is out of the Senate race following the disqualification of Onyereri, former House of Representatives member for Nkwerre, Isu, Njaba, and Nwangele.

On Thursday, a spokesperson of Ihedioha, AIC Akwarandu told Newsmen that the accusation against his principal was “the biggest joke of 2023”.

The aide questioned why the ex-Deputy Speaker of the House of Representatives did not use his alleged power to keep remain as Imo Governor.

The Supreme Court fired Ihedioha in January 2021 in favor of the incumbent, Hope Uzodinma of the All Progressives Congress (APC).

“If Ihedioha had such powers to swing Supreme Court judgment, why did he not use it for himself?”, Akwarandu quipped.

“People should stop the distractions. Ihedioha is not from Orlu zone, he didn’t run for Senate, he had no personal interest in who won or who did not.

“Those who contested election with Jones Onyereri took him to court. They are his brothers from same Orlu zone.

“Those blaming Ihedioha are petty and trying to distract Ihedioha from the focused campaign he is leading for Atiku Abubakar and other PDP candidates in Imo.

“Please the public should kindly disregard. This is untrue and evil conjunction by enemies of the state”, Akwarandu stated.