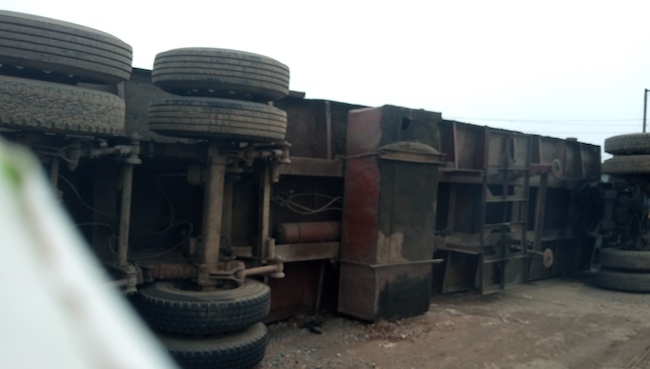 At the Upper Iweka, opposite Obodoukwu junction of the Onitsha-Owerri Road, Anambra State, a caravan pulling a 40-ft fully filled container has collapsed.

The caravan was moving toward Onitsha’s major market while carrying auto parts.

The collision involving the caravan and two tricycles resulted in the death of one individual, a girl. It happened late on Thursday.

According to an eyewitness, the trailer’s driver lost control while negotiating the road’s potholes, rammed into a tricycle at the front, and the container it was carrying fell off and landed on another tricycle that was picking up passengers by the side of the road, instantly killing a woman who was already seated inside.

The source said, “As the driver of the trailer was navigating through the potholes, he lost control of the vehicle and hit a tricycle in his front, and the container it was carrying fell off from it and landed on another tricycle loading passengers by the roadside.

“Three persons were already seated inside the tricycle, while two others immediately escaped, the woman could not as the container fell on her and killed her instantly. It took a lot of rescue efforts before the body was removed from under the container.”

2023: In Bauchi State, Kwankwaso’s Coordinator Switches From NNPP To PDP

Gbajabiamila Urges Lawmakers To Focus On Their Legislative Responsibilities