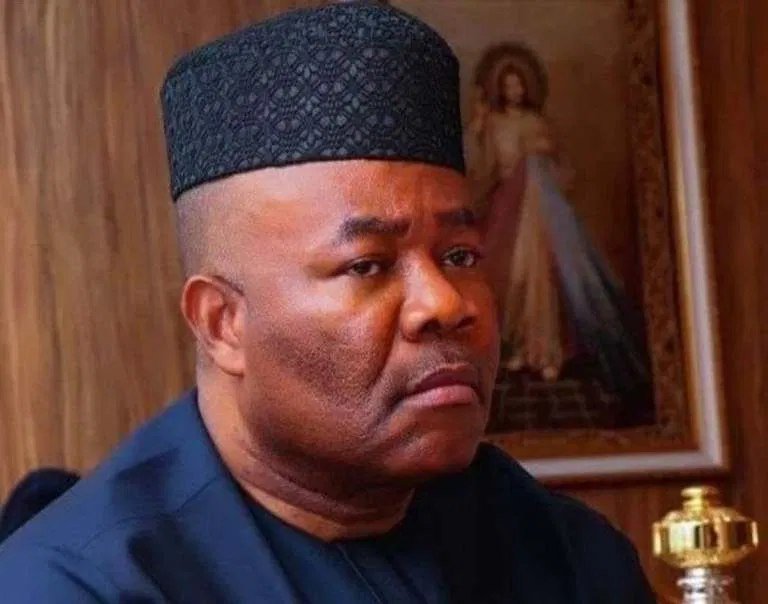 Senator Godswill Akpabio, a former minister of Niger Delta affairs and the All Progressives Congress candidate for Akwa Ibom North-West Senatorial District, urged voters on Wednesday to support the broom (the APC logo) because the umbrella party, the Peoples Democratic Party, was in disarray.
He claimed that the umbrella party could no longer provide protection because it had been shattered, which was why he joined the APC.

With their support and votes in the National Assembly elections on February 25, the former minority leader informed the citizens of the local government that he was determined to provide better services.

He said, “Next month’s election is a national one. We must use our votes to return Senator Bola Ahmed Tinubu as our president, me as your Senator and other national assembly candidates on the 25th of February.
“The logo of our party is the Broom. I am now in the broom party because the umbrella had long been torn into shreds.”

Akpabio, who is the National Vice Chairman of the APC Presidential Campaign Council, said that he decided to kick off his ward tour after his Supreme Court victory in Oruk Anam because of his love for the people of the area and to show his appreciation for their support for him since 2006.

“The people of Oruk Anam are my political backbone and this dates back to 2006 when I was aspiring for the governorship of our dear state. You people supported me to defeat over 56 other aspirants at the primaries. You also stood by me to win the governorship election in 2006 and re-elected me in 2011.
“As governor, I laid a solid foundation for the future development of our senatorial District and the state in general. My uncommon performance in office as your governor was to lay foundation for the emergence of another governor within us in the future because as they say, one good turn deserves another.

“Before I left office in 2015, I was able to link Abak, Etim Ekpo and Ika local government areas to other parts of the state through good road network, ” he declared.

Meet The Youngest Monarch In Anambra

In his speech at the rally, the House of Assembly candidate for Oruk Anam State constituency, Mr Aniekan Solomon Abraham aka Ani Solo, promised to deliver the local government to the party, saying,”We appreciate you and your campaign team for making Oruk Anam your kick-off point for the senatorial campaign, it shows how important we are to you over the years. You and our presidential candidate are our project in this local government.

“Your ambition cuts across party lines. We need a voice at the national level and we have collectively agreed that we will deliver Asiwaju Tinubu, Senator Akpabio and other candidates at all levels. The results at the end the polls will speak for itself.”

Surprised at the massive turnout of supporters, Senator Akpabio said he went for a ward tour but the turn out was like a Local Government Area rally.

He appreciated the people for the massive support and pledged to reciprocate the gesture with their mandate to the Senate.