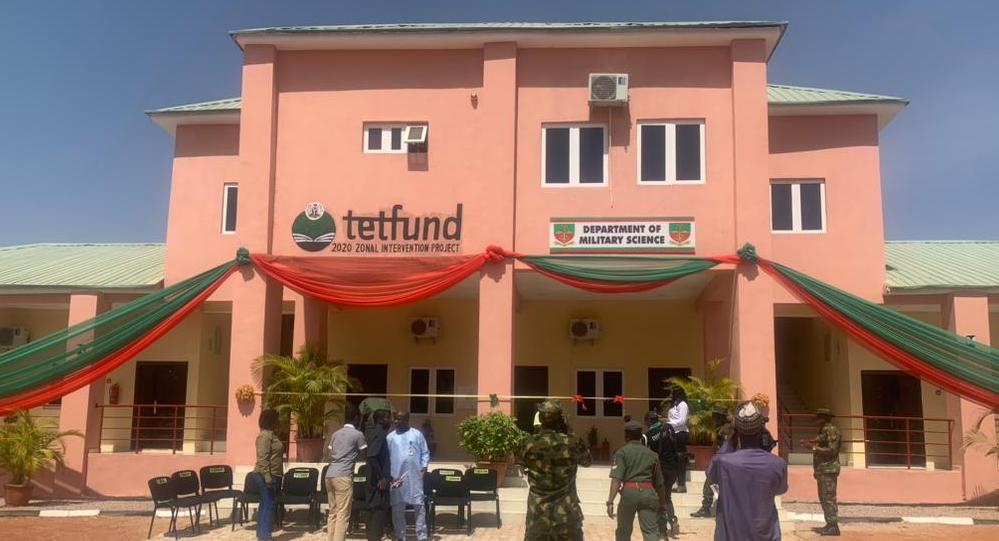 The President, Major-General Muhammadu Buhari (retd), has launched Tertiary Education Trust Fund-sponsored annual intervention projects at Nigeria Defence Academy, Nigerian Airforce Institute of Technology, Kaduna Polytechnic, and Kaduna State University.
The President, who was represented by the Chairman of the Senate Committee on Defence, Senator Aliyu Wamakko, stated that the projects at NDA consumed over N685 million, AFIT consumed over N604 million, KASU consumed over N491 million, and Kaduna Polytechnic consumed over N450 million for the 2020/2021 annual intervention and merged projects.
A Computer Based Test Hall, Faculty of Management, and Military Science buildings were inaugurated at NDA, as were AFIT, Department of Cyber Security, Students’ Hostel of the 2020 Zonal Intervention, and Students’ Hostel of the 2021 Zonal Intervention.

Also, at The Kaduna Polytechnic, some of the commission projects are the newly constructed Department of Railway Engineering, Classrooms for Chemical Engineering and High-Grade Oxygen Plant for Medicals.

In his remarks shortly after the launching, Senator Wamakko stressed the importance of education in the nation’s development, adding that inaugurating the projects, would in no small measure enhance teaching and learning in the country.

According to him, education forms an integral part of President Buhari’s administration agenda.

He said, “Education as we all know, plays a critical role in the socio-economic development of nations, and therefore, the commissioning of these projects today would in no small measure further enhance teaching and learning and improvement of academic standards.

“I wish to reiterate that education forms an integral part of the President Muhammadu Buhari administration’s agenda, hence the Federal Government would continue to provide necessary support towards making our educational institutions globally competitive for the economic and technological development of the country.
“It is on record that through the support of the Federal Government, TETFund has performed exceptionally in the provision of physical infrastructure, support for academic staff training and development, book publication, ICT, Research and Development amongst others in public tertiary educational institutions across the country.

“I am delighted to note that the Airforce Institute of Technology, Kaduna and other public tertiary educational institutions in Kaduna State have not been exempted from these intervention efforts of TETFund.”

Earlier, the NDA Commandant, Major General Ibrahim Yusuf said the institution had received over N8.2 billion in support from the TETFund in the last seven years.

He explained that about N6 billion of the money went into infrastructural development while N2.2 billion was spent on training, research and publication, library and ICT, among others.
He added that the NDA currently has nine ongoing TETFund projects from the merged funds for 2019 to 2022 interventions.

Also speaking, the Executive Secretary of TETFund, Sonny Echono, said the event marked the start of a major TETFund activity in 2023.

Echono, represented by Director of Monitoring and Evaluation, Olatunde Olajide, said that in 2023, 162 iconic TETFund projects would be inaugurated in 54 tertiary institutions spread across 28 states.

According to him, the financing of the projects by TETFund is a clear demonstration of the Federal Government’s commitment to the provision of requisite physical infrastructure in the nation’s public tertiary institutions.

“It is our commitment at TETFund to ensure that value is obtained for funds allocated to the benefitting institutions to aid teaching, learning and research and by implication, make them globally competitive,” he said.

Echono then hailed the authorities of the NDA for successfully completing the three projects among other notable ones being executed in the Academy with TETFund support.