NAUTH Doctors Strikes In Protest Over Attacks On Staff Members 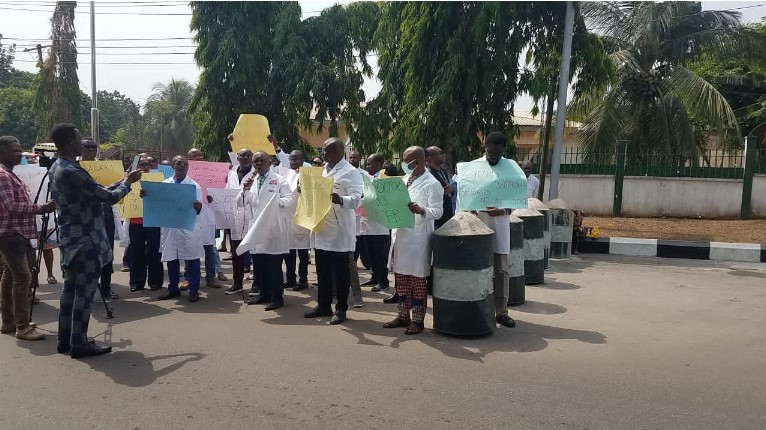 Due to the ongoing abuse of its members, the Association of Resident Doctors at the Nnamdi Azikiwe University Teaching Hospital in Nnewi has started a five-day warning strike.
The organization said that the strike would begin on Wednesday and that all medical services at the facility would be suspended.

After an emergency general meeting, it revealed this in a press release that was signed by the President, Dr. Ndukwe Chinwe, and the General Secretary, Dr. Egbue Obiora.

More than 100 people attended the gathering, it was added.
The group condemned the persistent assaults and attacks carried out by hospital patients’ relatives that have gone unchecked.

They lamented that one of its members on Sunday was brutally assaulted, humiliated and tortured for over two hours by a deceased patient’s relatives, before the late intervention of the hospital security outfit and management.

It said the call for the strike action followed the physical assaults and near-death experience by its members in the hands of patients’ family members.

It said these attacks have continued for a long period as the doctors continue to endure the pains of humiliation and therefore had no choice but to embark on the warning strike to draw attention to their plight.
The communique read in part, “The Association of Resident Doctors, NAUTH, Nnewi, had an emergency general meeting on January 24, 2023, following the physical assault and near-death experience of its member. The meeting which had over 100 members present, made the following observations:

“That on January 22, 2023, our member (internal medicine resident) went to review his patient at the male surgical ward, where he met nurses who were resuscitating another patient through CPR.
“In a bid to save the patient, our member joined in the resuscitation. Unfortunately, the patient died and the doctor was subsequently brutally assaulted by the deceased patient’s relatives.

“He endured over two hours of this torture and humiliation before the late intervention of the hospital security outfit and Management.

“While the Supreme Congress of Association of Resident doctors NAUTH, Nnewi acknowledges the efforts of NAUTH management to condemn the incident and ensure that the assailants were arrested by the police, amidst other measures, we, however, feel that more needs to be done to send a strong and clear message as a deterrent to all to ensure that assault on any doctor does not happen again.

“We, therefore, resolved as follows: A five-day total shutdown of clinical and emergency services has been issued by Congress, commencing from (6 am Wednesday) January 25, 2023, and ending on (8 am Monday) 30th January 2023.
“The Congress insists that Management should ensure prosecution of the culprits involved in this dastardly act so as to serve as a deterrent to others in the future.

“The security architecture of the hospital needs to be overhauled and replaced with able-bodied unarmed local vigilante or civil defence operatives.

“Management as a matter of urgency needs to recruit more resident doctors and medical officers so as to increase manpower and improve service delivery.

“Management should enforce strict adherence to visiting time, and no patient relative should be allowed in the ward outside of the visiting time.

“The resolutions listed above will be reviewed at the next Ordinary General Meeting in the next one month and Congress will decide on the way forward.

“We urge Management to promptly attend to our resolutions as listed above in the next one month to avert any further industrial action.”