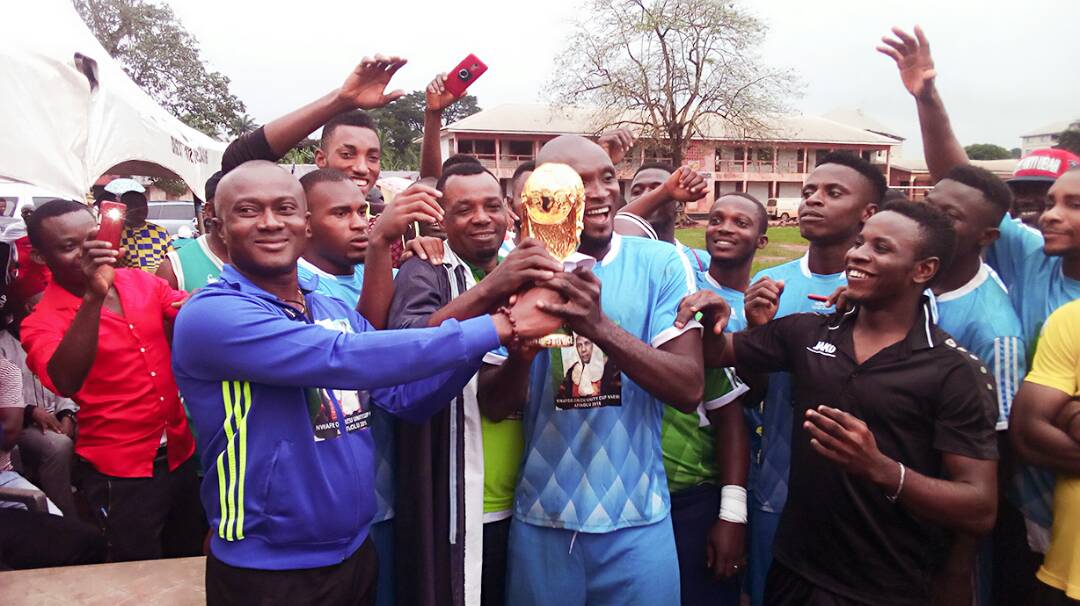 The 2018 Nnewi Afia Olu football tournament in memory of the Former Acting President of Nigeria, Dr. Akwaeke Abyssinia Nwafor Orizu ended during the weekend with the team from Otolo community emerging victorious.

The competition which was fashioned in the setting of a league; where the team with the highest points is adjudged the winner, had the team from Otolo community emerging victorious. However, in the final match which was played at the Nnewi High School field, saw Otolo beating the third runner-up Umudim by a lone goal.

The finals which was kicked off by one of the sponsors of the competition Dame Princess Esom Nwafor- Orizu was well attended by different Nnewi personalities and hundreds of cheering fans.

Speaking after the Match, the Chairman of Nzuko-Ora Nnewi Chief Sir Ugochukwu Udemezu thanked the organizers of the competition for ensuring that the tournament was a peaceful one. He praised the sponsors of the competition Mr Frank Udogu and Dame Princess Esom Nwafor- Orizu for marking sure that tournament was a success, he also urged other Nnewi indigenes both home and aboard to emulate the kind gesture of the sponsors of the tournament which will be instrumental to the unity and progress of Nnewi.

On her part Dr. Esom Nwafor-Orizu who spoke on behalf of Nwafor- Orizu family thanked the leadership of the Nzuko-Ora Nnewi for recognizing the need to honour their father His Excellency Dr. Akwaeke Abyssinia Nwafor Orizu who contributed largely to the development of Nnewi, Nigeria and Africa. She also thanked Mr. Frank Udogu for thanking part of the responsibility of sponsoring the tournament.

Mr Frank Udogu who is also the Chairman of Nzuko-Ora Nnewi China in his speech thanked the organizers of the competition for dedicating the tournament in memory of Nwafor- Orizu who attained success through honest labour and resourcefulness which helped him achieve fame in life. He advised other Nnewi youths both home and aboard on the need to start involving in community development which will facilitate peace and progress in the town.
Nnewi Crown Prince Dr. Obi Orizu who represented His Royal Highness Igwe Kenneth Orizu (111) added that the tournament should always be organized and promoted every year to ensure unity among the youths and add colour to Afia Olu Nnewi festival.