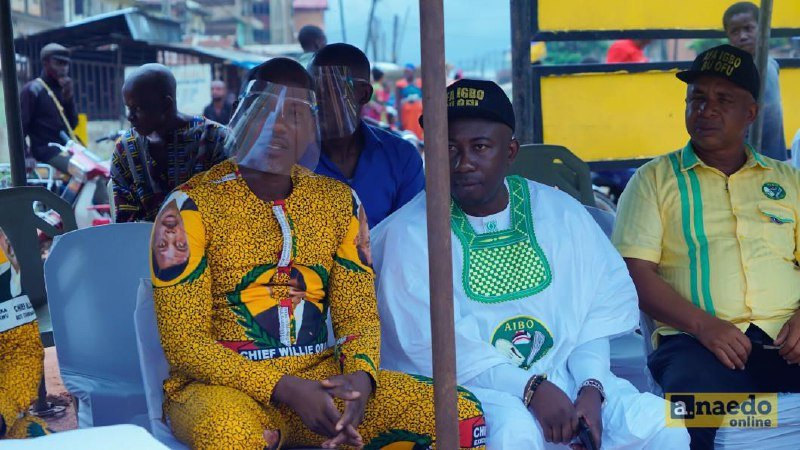 -They say when you practice the art of Thanksgiving, the more you have to be thankful for-

The above statement is the reason behind the APGA and AIBO Nnewi North “Say Thank You” program, which was held today, 5th September 2020, in appreciation of the erosion intervention project by the government at the 100-foot road erosion site, Uruagu, Nnewi, Anambra state.

The erosion site has been a major nightmare for the surrounding communities, ravishing and destroying properties, cutting off the community from the well known Nkwo Nnewi market for years. So many of the indigenes were forced to flee their homes or risk their lives until the intervention of the government.

The event officially kicked off around 2:52 PM with an opening prayer by His Lordship, Bishop Orizu, and an opening note by the All Progressive Grand Alliance (APGA), Chairman Nnewi North, Mr. Chike Agwuncha. The Chairman in his speech narrated their ordeals with the erosion and expressed his gratitude to the Governor.

Sir Ugochukwu Udemezue, PG Nzuko-Ora Nnewi who spoke after the APGA Chairman, commended Hon. Nonso Smart for his efforts in bringing the attention of the government to the notorious 100-foot road erosion site.

He also thanked the Governor and commended him for the cars he gave to the monarchs in the state, noting that they were produced in the town by one of their sons, Chief Innocent Chukwuma.

Tochukwu Nwokedi, the PG of the community recounted their horrific experience with the disastrous erosion which he said plagued the community for so many years.

Nwokedi narrated how his uncle, a lecturer in Oko Polytechnic, Professor Ike Nwosu lost his large building to the erosion and nearly his life also. He thanked Hon. Melie Onyejepu for his effort in bringing this project to actualization, he also expressed his gratitude to the Commissioner of works.

Speaking during the event, Hon. Nonso Smart Okafor revealed that his first-ever motion in the house after he was elected was the 100-foot erosion site. The member Representing Nnewi North in Anambra State house of Assembly disclosed how he badgered the Governor of the state for this project till the intervention came.

After 30 Years, Nnewi Market Gets Modern Toilet Facility
According to him, the sum of money spent on this project will be able to comfortably build more than 20 roads.

He further commended His Excellency, Gov. Willie Obiano, and the APGA party, he also revealed that this is just the Genesis and, more work is coming.

The Honorable Commissioner of Works, Hon. Afam Mbanefo who also spoke at the event assured the people of the commitments of the government to the project and also reiterated that more work is coming.

The Honorable Sir Melie Onyejepu who was also at the event spoke about his experience with the erosion and how he fought for it. He revealed that around 4 billion naira has been spent so far on the project and the Governor is still committed to finishing this intervention project.

The event was graced by the Crown Prince of Nnewi, Prince Barr. Obianefo Orizu, who briefly expressed his gratitude to all who made the project possible.

Before the closing remark/vote of thanks by Hon. Engr Chkwudi Orizu, the Transition Chairman of Nnewi North, the National Chairman of AIBO, Hon. Barry Chukwuma briefly expressed his gratitude and spoke about the project of his group, rewarding individual efforts in the community, after which he presented a motorcycle to one Mr. Bonaventure Ogbonnaya for his efforts in the party activities.

The state officer Madam Sylvia Veronica also gave a vote of thanks, amongst other party members

The appreciation ceremony had in attendance other dignitaries including, Obinna Okechukwu NASPA Chairman, Mr. Hector Osundu, Publisher Vintage Newspaper, Sir Fabian Obi, Vice-Chairman Nzuko-Ora, and a host of party faithful with their invited guests and the general public.The event was wrapped up with the cutting of the cake in honor of the project and showcasing of the masquerades.
Advertisement

2023 Presidency: The South-East Must Produce The Next President – Gov Ishaku