BBNaija: Mercy Eke Reveals The Secret To Her Success

US: Donald Will Not Get Pentagon Military Parade As He Exit White House

What Ozil Told Reporters In His First Interview At Fenerbahce

Who Is Afraid Of Dr Joseph Ugboaja?

Now that the Edo and Ondo states’ governorship elections are over, attention is gradually shifting to Anambra governorship poll. The exercise holds next year. 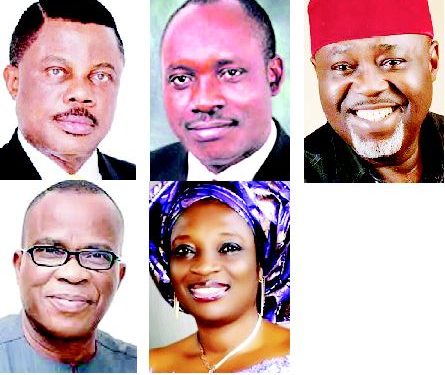 Governor Willie Obiano’s tenure will come to an end on March 17, 2020. The election where his successor will emerge comes up November 18, 2021. The date has been chosen by the Independent National Electoral Commission (INEC), barring any unforeseen development.

As a result, many aspirants have declared their intentions to replace him from the three major political parties, as well as the other fringe parties. The parties considered as favourites for the election are the Peoples’ Democratic Party (PDP), the All Progressives Congress (APC) and the All Progressives Grand Alliance (APGA).

The state has been governed by APGA in the last 15 years. Naturally, the incumbent administration led by Governor Obiano would do everything within its power to ensure that the party triumphs.

About 12 persons have shown interest to succeed Obiano on the platform of the PDP. Prominent among them are Dr. Obiora Okonkwo, Valentine Ozigbo, Senator Uche Ekwunife, Chris Azubogu, Godwin Ezeemo and Dr. Godwin Maduka among others.

It is not clear yet who is going to contest on the APC platform, as they are still playing a hide and seek game.

But, some chieftains of the party have shown interest in the contest. For instance, Chidozie Nwankwo (Witchtech) has been moving around telling his party members that he intends to contest.

Similarly, Dr George Moghalu, who is the Managing Director of the Nigeria Inland Waterways Authority (NIWA) also appears to be eyeing the position.

Others who have been working underground are Dr Tony Nwoye and Senator Andy Uba.

In APGA, it is like a one-man show. Apart from Prof Chukwuma Soludo, one-time Central Bank of Nigeria CBN governor, other would-be aspirants are still trying to read the body language of Governor Obiano to decide whether to declare their intention openly or not.

Among the lesser-known parties, Senator Ifeanyi Ubah is one of the prominent aspirants that have their eyes fixed on the seat. The oil and gas mogul is likely to contest on the platform of the Young Peoples’ Party (YPP).

If not the crisis that has kept the PDP divided and weak over the years, no other party can withstand it in the state.

The APGA leadership from Mr Peter Obi’s era to date has done well for the people of Anambra State and it will take a miracle to dislodge it.

Even at that many people are still not happy with the level of development in Anambra. As a result, APGA may face some internal problems as preparations for the election reaches top gear.

The major issue that may decide where the pendulum would swing next year in Anambra remains the zoning arrangement.

The ruling party led by Governor Obiano has followed the zoning arrangement put in place by his predecessor, Obi, by declaring that Anambra South senatorial district would produce the next governor.

It was Obi that engineered the emergence of Obiano seven years ago on the grounds that his district, Anambra North, was the only zone that was yet to produce a governor then.

In spite of the opposition from many quarters, Obi stood his ground to ensure that the incumbent emerges as the first governor ever to come out from Anambra North, when he insisted that power must shift to the district.

Before then, the governorship had rotated between Anambra Central and Anambra South respectively. Former governors, Chinwoke Mbadinuju, Andy Uba, Dame Virgy Etiaba and Chukwuemeka Ezeife all came from Anambra South.

But, since the pronouncement by the APGA leadership that it intends to zone the ticket to Anambra South in 2021, the other major parties have criticised the decision.

In fact, from all indications, the PDP is likely to pick its candidate from Anambra Central; Dr Obiora Okonkwo is leading the race for the ticket. This is owing to Okonkwo’s popularity. Nevertheless, some of the party’s other aspirants are getting ready for a fight over the ticket.

However, PDP Chairman, Sir Ndubuisi Nwobu has debunked the claim that the ticket is reserved for a particular aspirant or any zone for that matter. He said he has never supported any of the aspirants since all of them are qualified to contest for the ticket.

Nwobu maintained that the governorship primary would be free, fair and credible.

Observers believe Peter Obi is likely to play a decisive role in determining who emerges the party’s candidate for 2021.

At the moment, two major stakeholders, Senator Joy Emodi and Chief Chris Uba appear to have been sidelined. A party chieftain who pleaded anonymity said “if they don’t bring people like Emodi and Uba in because of the presence of Obi, then our party will not make any headway in the election”.

Another PDP bigwig said the party will not adhere to the zoning arrangement, as it will throw the ticket open to aspirants from all the three zones.

In APGA, the leadership appears to have made up its mind to give the ticket to Soludo. As a matter of fact, the former CBN governor has over 25 support groups within his party and opposition canvassing support for him at the grassroots.

But, since Soludo who is a member of President Muhammadu Buhari’s Economic Team does not appear to have an affinity with any political platform, any party that adopts him as its candidate is likely to win the election.

The zoning arrangement, which favours Anambra South to produce the next governor, favours him. He hails from Isuofia in Aguata Local Government Area.

Soludo is, however, facing a major hurdle from a small group led by one powerful woman. Anaedoonline.ng gathered that the lady is not comfortable with Soludo becoming the next governor because of his perceived uncompromising posture.

If, eventually, APGA denies Soludo its ticket, as it did to late Dim Chukwuemeka Odumegwu Ojukwu’s widow, Bianca, the APC would be the beneficiary of such a development.

For APC, the waiting game continues. Only two persons have shown interest in the party’s ticket. They are Dr Nwankwo and Dr Moghalu.

Being the lone ranger in the YPP, Senator Ifeanyi Ubah is likely to clinch the party’s ticket. His party may not be popular in Anambra, but his style of politics has started making the YPP a household name in the state. So far, he has won all the elections he has contested in his Nnewi area.

But, the governorship is a different ballgame because he requires support from other zones to excel.

The 2021 governorship contest in Anambra state is going to be a battle of billionaires. Some of them already mobilizing. These billionaires are set to shake the state and make the 2021 election the most competitive and memorable in history.

Some of the political eggheads, like former Governor Chukwuemeka Ezife, is leading the people of his domain, Old Aguata Union (OAU) in calling all political parties to choose their candidates from Anambra South

Governr Obiano said his party is committed to the zoning arrangement. He insists that APGA will pick its candidate from Anambra South.

The idea of remaining faithful to the zoning arrangement initiated by Obi was initiated by a group known as Great Anambra Forum (GAFORUM), led by one Fab Ozoigbo. He formed the group alongside former commissioners, local government chairmen and other political leaders numbering over 200.

While speaking with newsmen, Ozoigbo said never again would a technocrat or politician based outside the state rule Anambra State. He said GAFORUM was not interested in any political party, be it APC, PDP or APGA. Rather, it would support a candidate with grassroots orientation.

The traditional rulers are divided over the zoning arrangement. For the Obi of Onitsha and Chairman, Anambra Traditional Rulers’ Council, Igwe Alfred Achebe, the monarchs would go with Obiano and Ezeife.

But, some traditional rulers from Anambra North and Anambra Central are challenging such decision. This group is led by the monarch of Igbariam, Nkeli Kelly Nzekwe.

The Igbariam monarch is joined in the opposition by almost all the traditional rulers suspended by Obiano recently for visiting President Buhari without permission.

Interestingly, nine of the governorship aspirants being paraded by different political parties are from Anambra South. They are Chidozie Nwankwo of the APC, Valentine Ozigbo (PDP), Ekwunife by birth but married to a man from Anambra Central (PDP), Ezeemo (PDP) and Godwin Maduka (PDP).

From all indications, opposition parties like the APC and the PDP do not appear to have endorsed the zoning arrangement.

The two-state chairmen, Sir Ndubuisi Nwobu (PDP) and Sir Basil Ejidike (APC) have made it clear that the zoning formula was purely an APGA affair.

Ejidike said the ruling party will never dictate to them. He said as political parties they reserve the right to choose their candidates from any of the senatorial zones.

One thing is obvious; it is going to be a supremacy battle for the APC, the PDP and the APGA in Anambra 2021 governorship election.

The only thing that can change the equation is if any of the wealthy top contenders is denied his party’s ticket and he jumps to another small party to contest.

However, the other contenders must not take their eyes off the YPP billionaire oil magnate.

Another major factor, apart from the zoning arrangement, is the church. Under Peter Obi, the church was introduced into the politics of Anambra State and it has remained a pain in the neck of contestants.

Anambra State has the majority in Roman Catholics and the leaders of the Faith, have really made use of that position. The situation has divided both the Catholics and Anglicans the more, while the Pentecostals keep growing in numbers too.

Most of the appointments in the government are held by the Catholics, while the sharing formula of anything remains 60, 30 and 10 per cent.

A die-hard APGA member, who spoke with newsmen, in Awka, said: “We rely so much in the prayers, as it was in the beginning, and so shall it be.”

The source said it would be difficult for any group to dislodge the Roman Catholic from the politics of Anambra State, unless on consensus.

BBNaija: Mercy Eke Reveals The Secret To Her Success