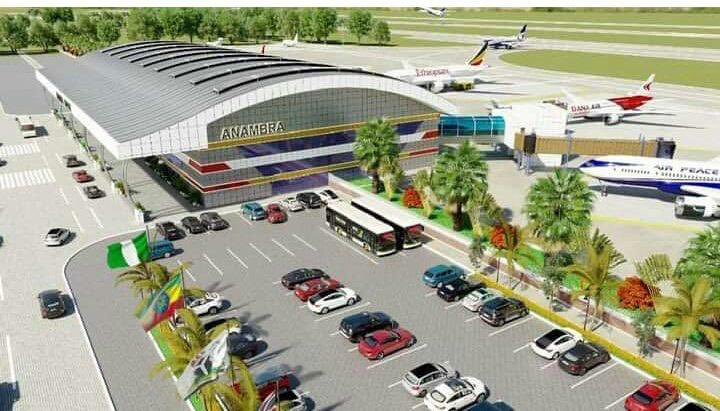 History was made today April 30, 2021, as Ndi-Anambra, members of the All Progressive Grand Alliance (APGA), commissioners, captains of industries, residents and indigenes of Umueri the host community, students, the media came out en mass to witness the maiden flight to Anambra International Cargo/Passenger Airport Umueri, Anambra East LGA.

The Governor of Anambra State, Willie Obiano in his speech expressed excitement over the first aircraft landing in Anambra State. According to him, “This is one of my greatest legacies. Anambra did not borrow a kobo to build this airport, this in itself is a record. This airport is a fulfillment of our vision and mission. The economic value of this airport cannot be quantified. I must commend the zeal and determination of the construction companies.”

Obiano went on to add: “I must also commend the commissioner of works and his team who started this airport and saw the fulfillment. I also thank the entire people of Umuleri community. Very soon commercial flights both local and international will commence operation.”

On his part, the chairman of Air Peace, Allen Onyema who was aboard the plane that landed at Umueri Airport while spoke at the event. He said that this is the fastest duration an airport will be built in Nigeria (fourteen months according to him).

In his words: “I shed tears when I was coming down because I never believed this airport will be completed so fast. May God bless the government of Willie Obiano.”

The commissioner for works Anambra state, Mr. Marcel Ifediofor in his address expressed gratitude to Gov Obiano for fulfilling the promise he made to Ndi Anambra. He listed the benefits the airport will be to Ndi-Anambra and Nigeria as a whole.

His Royal Highness Igwe Sir Ben Emeka (Igwe Umueri) in an interview with newsmen thanked Governor Obiano for choosing Umueri for the location of Anambra Airport.

The member representing Njikoka 2 constituency at the Anambra State House of Assembly, Hon. Pete Ibida in an interview said today will go down in the history of Anambra State as a day a monumental milestone was reached.

Umuleri is 34 KM from Onitsha the commercial capital of the state and 45 minutes drive via Nkisi and Enugu-Onitsha Expressway. The State Capital Awka is about 41 KM from Umuleri and about 50 minutes by road from the new airport. Umuleri Airport is just over 50 KM from the commercial giant city of Nnewi and just over one hour 15 minutes to get to the airport from Nnewi.

Of all Anambra’s principal cities of Anambra, only Onitsha has an airport closest to it. The Asaba Airport is just 20 KM from Onitsha and 35 minutes drive. But the traffic jam at the Niger Bridge may double, triple, or quadruple the time of arrival, depending on the time or season you hit the bridge. Umuleri may be the safest bet for airport users from Onitsha.