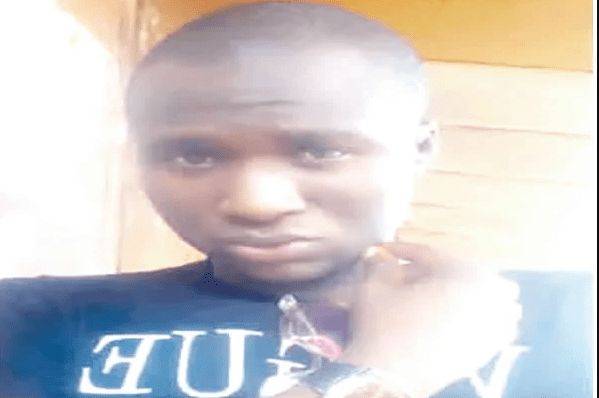 A man identified as Emmanuel Odaudu after been held in the military Special Investigation Bureau underground cell in Abuja for over eight months because of an old Facebook video regains freedom
Emmanuel was released last Friday following the involvement of human rights lawyer, Femi Falana, SAN.

Falana had described Emmanuel’s continued detention by the military as illegal and unconstitutional, adding “Our law firm is taking up this matter and we are going to demonstrate through this case that the Nigerian Army has no power under the law to arrest a civilian without transferring him/her to the police in line with the provisions of the Administration of Criminal Justice Act.”

The mother of Emmanuel, Helen had disclosed that his son was arrested and detained over an old video posted on Facebook, where he was seen rapping while in uniform.

Moment Secondary School Boy Killed A Girl, All For Love

Mrs. Helen further stated that efforts to secure the release of her son after he was arrested in their hometown of Otukpo, Benue State, proved abortive.

Helen while reacting to the release said, “My son has been released, but when I went to see the lawyer representing us from Falana and Falana Chambers, he said the case is still on and that the Army is not withdrawing it.

“He was released on Friday, June 11, 2021. I was very happy when I saw him; it was like a dream come true. I appreciate God, my special thanks goes to PUNCH Newspapers, the Falana and Falana Chambers and every other person, who stood by me during my trying period.”

#TwitterBan: You Have 30 Days To File Your Defence – ECOWAS Court To FG