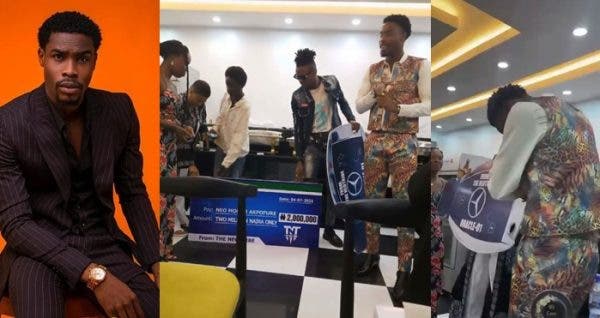 Big Brother Naija ”Lockdown” star, Neo Akpofure was gifted a Mercedes Benz car and a sum of N2million by his fans as he celebrated his birthday yesterday.

The reality TV star got the gift asides that from his girlfriend Vee and fellow ex-housemates, who came out in their numbers to show him love

A Twitter user, @ormainy shared the photo of the cheque and wrote;

”I’m so happy! Neo’s 5 fans gave him a Mercedes Benz with N2M! Plus other many gifts! Neo was already so happy with all the gifts he got earlier in the week and sending appreciation messages etc, this is major surprise for him. Such a grateful guy. Kudos to TNT!”