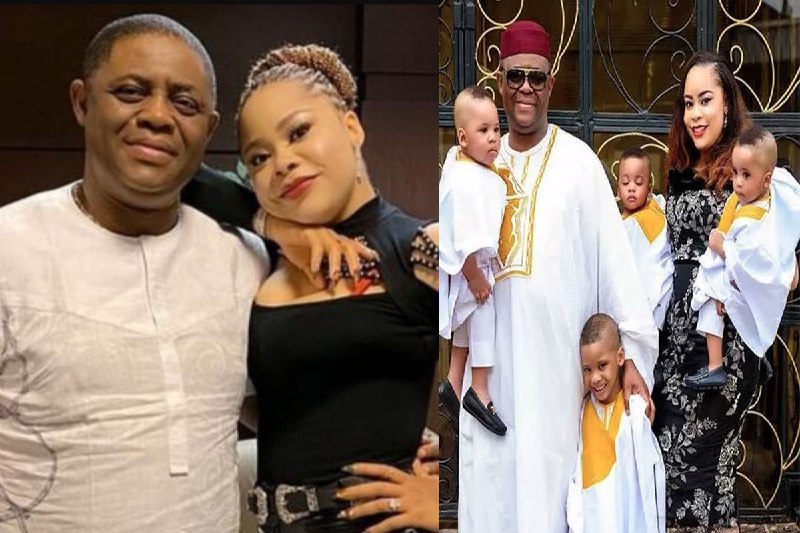 The estranged wife of the former Minister of Aviation, Femi Fani-Kayode, Precious Chikwendu, has narrated how some highly-placed individuals tried to save her marriage.

In an interview with Chude Jideonwo, Precious stated that the leader of the Indigenous People of Biafra (IPOB), Nnamdi Kanu, the late T. B. Joshua and former National Security Adviser (NSA) Sambo Dasuki tried to save her marriage with Fani-Kayode.

According to the former beauty queen, the All Progressives Congress (APC) chieftain abused her during her pregnancy due to his mental health issues.

Femi Fani-Kayode: I Caught My Wife In Bed With A Married Man

She also accused Fani-Kayode of hating Igbo, adding that the former minister claims that people from the southeast are rude.

Chikwendu said, “Even at the course of the embryo implanting in me, I had the most violent experience, beatings and punches and he would tell me that he would get rid of me. He would ask his bodyguards to take me and lock me up inside.

“The Dasukis have been involved, both Colonel Dasuki Sambo and his wife have been involved. Nnamdi Kanu, even at some point, called me to plead with me. I got a call from the late T. B Joshua to at least come over to Lagos, that he wanted to settle the issue.

“The first thing he is going to ask is for a picture to debunk stories, that’s the first thing he does; whenever there’s a fight… He says it’s a cultural thing for the Igbo to be rude and that is why we don’t have a hierarchy. I heard all of that from him. Even the staff in the house, that you are an Igbo staff member is a problem. He says ‘that Igbo boy, I don’t like him, sack him.’”

Precious added that she is yet to see her children after the crash of her marriage with the APC stalwart.

“The children are with him, I haven’t seen them since August 2nd, 2020. The court didn’t grant him custody. I’m physically prevented from seeing them. Most times, I would agitate because my kids are in there, I can’t leave.

“I don’t know where my kids are, I don’t know the school he changed my sons to. I’m told they go to school. The last time I filed a suit in court, they said the children are in school and they are okay,” she said.