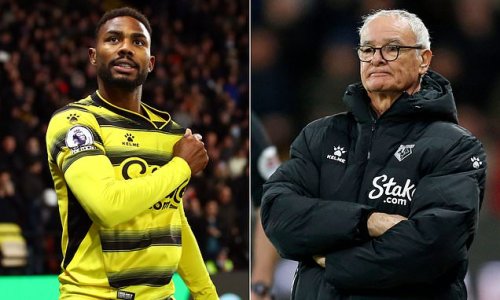 “Watford stopped him from featuring at the AFCON,” Eguavoen said after Friday’s training session in Abuja.

“Dennis told me he wanted to come for the tournament but Watford threatened him from coming. I feel bad that some of them like Paul Onuachu, Osimhen and Dennis won’t be there but I feel the 28-man list is good enough to go for the AFCON.

“I only informed Onyekuru once and he was excited same as Tyronne Ebuehi and Semi Ajayi.”

However, Claudio Ranieri insisted Watford had not disrespected the Africa Cup of Nations after Nigeria confirmed talisman Emmanuel Dennis will no longer be travelling to the tournament.

Dennis was ‘excused’ from the squad in a major boost for fourth-bottom Watford who were accused by the Nigeria Football Federation of ‘baring fangs’ ahead of the frontman’s removal from the squad.

Dennis, Watford’s eight-goal top scorer, had been included in Augustine Eguavoen’s 28-man party for the tournament in Cameroon.

However, Ranieri raised doubts about Dennis’s involvement following Watford’s midweek defeat to West Ham by revealing Nigeria may have missed the deadline to inform the Hornets of their intention to select him and that administration error gave Watford a choice whether or not to release him.

Ranieri said, “I knew they were speaking, the Watford board and Nigeria board and I accept every decision they fine and that for me is finished.

“No (we have not disrespected AFCON). We respect everybody. They have a lot of players and they changed the manager then changed everything.

‘We were ready to give the players. They didn’t do this and the two boards spoke and for me it’s ok. I am only the manager, the coach and I accept everything.’

There are also suggestions that a lack of assurance about the role he was due to play at AFCON also played a part in the decision to release Dennis from the squad.

Watford play two league games plus an FA Cup tie between the date Dennis would have departed and the AFCON final.

They include crucial bottom-of-the-table battles against Newcastle and Norwich.

And they will now have the scorer or creator of 59 per cent of their goals this season available at a key time in their bid to beat the drop.

Nigeria have been drawn in Group B alongside Egypt, Sudan and Guinea-Bissau.

The Eagles will commence their campaign against the Pharaohs on January 11 at the Roumde Adjia Stadium in Garoua.

Four days later, they will face Sudan before squaring up against the Guinea-Bissau on January 19 in Garoua.