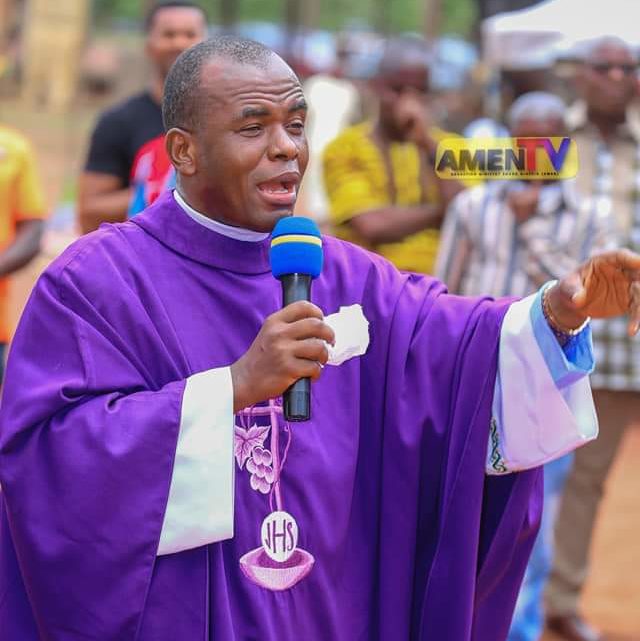 The Spiritual Director of Adoration Ministry, Enugu, Rev. Fr. Ejike Mbaka, said on Sunday that another invitation had been sent to him from the Department of State Services.

Operatives of the DSS had in June 2021 visited the Adoration ground to deliver a letter of invitation to Mbaka.

According to report, Mbaka raised a fresh alarm on Sunday that his life was no longer safe, stressing that an anonymous person brought another invitation to him for interrogation by the DSS.

He had earlier disclosed the invitation from the DSS in his New Year message during the crossover night service at the Adoration Ground, Emene, Enugu.

Mbaka pleaded with his followers to intensify prayers for him over the fresh trouble, saying he did not do anything wrong to warrant the hunt.

“Anonymous brought a letter here inviting me to the DSS last year. Now, another anonymous has brought another letter from the DSS. Please, you must keep praying for Fr Mbaka,” he said.

He described his Adoration Ministry as an answer to the prayers of the church over the years.

He said, “If the Pope sees what is going on here, he will go to any length to protect it. Forget about what people are saying. Mbaka may not be the best, but God is using him to glorify his name.

“Look at the hundreds of thousands of people who are gathered here just to worship God in the Catholic Church. Anyone who is working against this kind of gathering must be a Satan incarnate. That person must be doing a special work for the devil.”

His invitation might not be unconnected to his utterances and actions toward support for the leader of the Indigenous People of Biafra, Nnamdi Kanu.

In a video shared on Saturday, Mbaka asked his congregation to hold candles and prayer for Kanu in the detention of the DSS.

He also said that nobody could stop the church from praying for Kanu, adding that Jesus also prayed for a thief on the cross of Calvary at the point of death.

LATEST: There Is An Existing Plan To Kill Me – Rev Fr Mbaka (Video)

Anambra 2021: Nobody Can Buy Me Over – Fr Mbaka Speaks On Who Will Emerge Winner

To End Sit-At-Home In South East, This Is What To Do – Mbaka To Buhari

LATEST: How To End Banditry In Nigeria – Father Mbaka