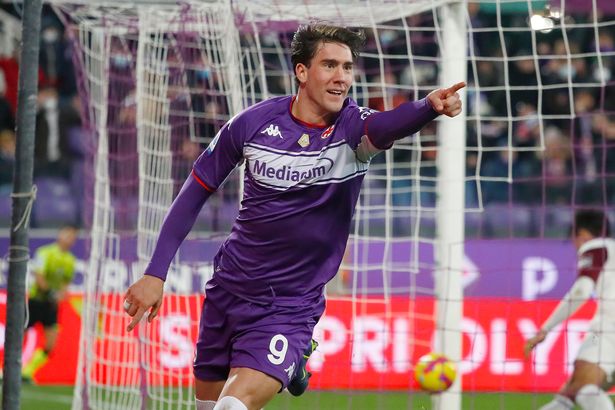 Anaedoonline.ng understands that the English Premier League club is in dire need of a good striker after it sidelined former captain, Pierre-Emerick Aubameyang.

According to reports, Aubameyang who was punished recently for a ‘disciplinary breach’ is willing to leave the North London club this January transfer window.

To make a replacement for the Gabon International, Arteta has reportedly listed Vlahovic among four strikers he is hopeful to storm the Emirates.

According to Gazzetta dello Sport, Arsenal has submitted an offer of £45.8m plus Lucas Torreira to Fiorentina for Vlahovic’s signature.

The Gunners value the deal overall at €70m and are hopeful that the offer will be enough to convince the Serie A side to sell the 21-year-old this month.

Anaedoonline.ng understands that Vlahovic is one of Serie A’s most in-demand strikers, having scored 16 goals in 19 league appearances so far this season.

He has also drawn the interest of Tottenham Hotspur.

However, in a related story, Chelsea head coach, Thomas Tuchel has disclosed that Romelu Lukaku has apologized to the board and coaching staff of the club over his recent interview.

Lukaku had in a recent interview said that he wanted to return to Inter Milan because he was not very happy with the situation at Stamford Bridge and Tuchel’s decision to play him in a fringe role, Naija News reports.

Following the interview, the Belgian international was omitted from the squad for the game against Liverpool last Sunday.

Speaking on Tuesday during his pre-match press conference, Tuchel said Lukaku has apologized and has returned to the team ahead of their Premier League clash against Tottenham.

Tuchel added that the forward will remain at the club and continue to do his best for the Stamford Bridge outfit.

He said: “Romelu Lukaku apologized and he’s back in the squad.

EPL: Lukaku Reveals Football Club He Will Never Play For

“For me it was important to understand that it [the interview] was not intentional from Romelu. This is not as big as people want it to be – it’s not small but we can stay calm and accept his apologies.

“Romelu’s very aware of what happened and what he created. He feels the responsibility to clean his mess up. Maybe we’ll have a bit of smell from it, but he can handle it. He’s no other choice – he’s our player”.