Nnamdi Kanu: SERAP Slams Buhari Over ‘I don’t Interfere With The judiciary’ Comment With Alleged Evidence To Interferences 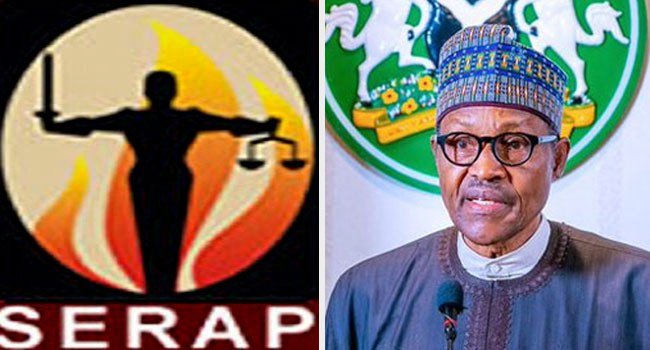 Following his statement that he does not interfere with the judiciary, the Socio-Economic Rights and Accountability Project (SERAP), Thursday disagreed with President Muhammadu Buhari, reeling out situations and events where Mr President had interfered in the judicial system.

Yesterday, Buhari appeared on Channels Television to speak on issues militating against the development and growth of the country.

When asked if he would release Kanu, Mr President said: “We cannot release Nnamdi Kanu. His case is for the judiciary. One of the things I promised myself is never to interfere with the judiciary. I have given him the opportunity to defend himself.

Kanu has been insulting us. He has been given incorrect figures and comments against us. He needs to account for what he did.

Reacting to the above statement SERAP accused Buhari of interfering with the judiciary, noting that his administration has implicitly interfered by his persistent failure to obey several court judgments obtained by SERAP.

“During his interview with Channels TV on Wednesday, President Muhammadu Buhari said “I won’t dare interfere with the judiciary.”

Well, his administration is already implicitly “interfering with the judiciary” by the persistent failure to obey several court judgments obtained by SERAP.

2. SERAP v. Minister of Power Suit No: FHC/L/CS/105/2019 where Hon. Justice Chuka Obiozor ordered his government to publish details of payments of billions of Naira to corrupt electricity contractors who disappeared with public funds without executing any projects since 1999.

Buhari should show his commitment to judicial independence by immediately directing the AGF to enforce the following judgments:

3. SERAP v. AGF: Suit No: FHC/IKJ/CS/248/2011 where Hon Justice Mohammed Idris ordered his government to prosecute principal officials and lawmakers suspected of padding and stealing N481bn from 2016 budget, and to publish the report on alleged 2016 budget padding.

4. SERAP v FGN: Suit No: FHC/L/CS/1497/2017 where Hon. Justice Oluremi Oguntoyinbo ordered his government to challenge the legality of states’ life pension laws, and to recover pensions collected by ex-governors now serving as ministers and members of the National Assembly.

5. SERAP v FGN: Suit No: FHC/IKJ/CS/248/2011 where Hon. Justice Idris ordered his government to publish details of spending of all recovered stolen funds since 1999 by his government, and those of former Presidents Olusegun Obasanjo, Umaru Musa Yar’Adua, and Goodluck Jonathan.

6. SERAP vs Federal Government suit number ECW/CCJ/APP/10/2020 where the ECOWAS Court of Justice ordered his government to pay a journalist, Agba Jalingo, N30 million as compensation for ill-treating and torturing him while in detention in Cross River state.

7. SERAP v. Federal Republic of Nigeria & Anor (No. 1) – ECW/CCJ/APP/08/08 where the ECOWAS court held that every Nigerian child is entitled to the right to education and ordered the government to provide education as a matter of rights, and to address corruption in the sector.

8. SERAP v. Federal Republic of Nigeria (No. 2) ECW/CCJ/JUD/18/2012 where the ECOWAS court ordered the government to hold all oil companies operating in the Niger Delta to account for oil pollution and associated human rights violations, and to pay adequate compensation.”

2023 Presidency: I Have All It Takes To Be Nigeria’s President – Pius Anyim

Twitter Ban: We Have Placed Nigeria On Watchlist – Commonwealth