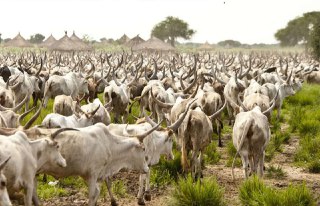 The Benue State Government has slammed N50,000 fine per animal for violation of the state’s anti-open grazing law.

Governor Samuel Ortom, who made this known on Thursday during a ceremony in Makurdi, the state capital, said that the amendment became necessary because the law had a lacuna.

He noted that the amount charged as fine was too meager compared to the sufferings encountered by livestock guards and other security agencies while arresting animals that violated the law.

Ortom commended the state’s lawmakers for painstakingly going through the law and passing it speedily.

He said, “Also, after paying the stipulated fine of N50,000, if the owner of the animals failed to move them, he will pay N20,000 per animal for each day that the animal might be under the care of the livestock guards.

“If the owner failed to pay the stipulated fine after seven days, the animal will be auctioned in line with amended law.

“Apart from the change in the fine, every other thing in the law remained unchanged.’’ l

The passage of the bill followed a clause by clause consideration of the report of the House Standing Committee on Agriculture and Natural Resources during plenary.

Leading debate on the report before the passage, the committee chairman, Mr Terwase Aondoakaa (Makurdi South/PDP), said that the principal law had some lacuna that should be reviewed.

Aondoakaa said that the bill if amended, would make any person found moving livestock on foot within or across urban centres, rural settlements or any part of the state pay N500,000 as fine for the first offender.

While a subsequent offender would be liable to pay N1million with appropriate prison terms and options of fine.

Furthermore, the amendment proposed a 14-year jail term with an option of N5million fine for anyone, who engages the services of an under-aged child to break the law.