Nigeria vs Tunisia: After Buhari’s Call, 10-man Super Eagles knocked Out of AFCON 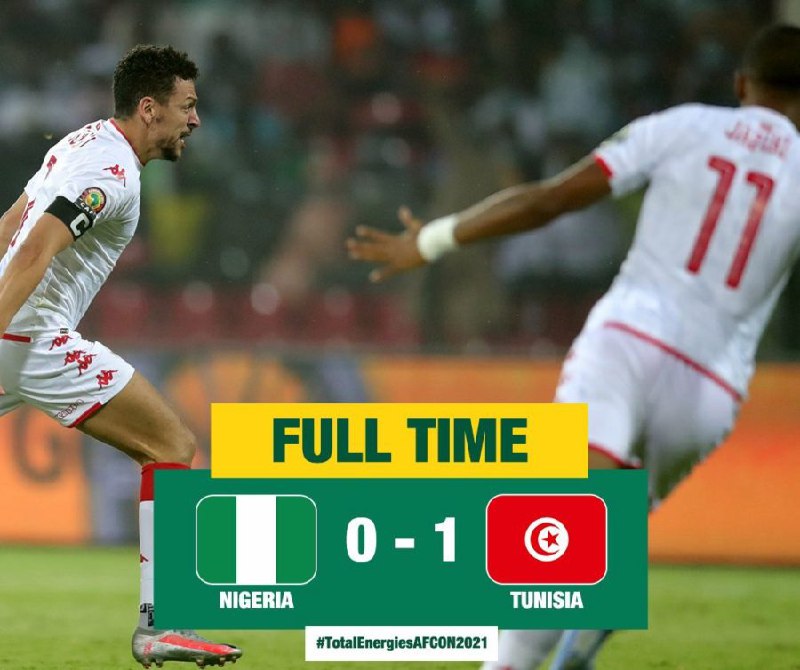 The Super Eagles of Nigeria are out of the 2021 Africa Cup of Nations. They lost 1-0 to Tunisia in their Sunday encounter in the AFCON Round of 16.

Barely two minutes after he was brought into the game, Alex Iwobi was sent off for a bad tackle.

This is after Tunisia shocked the Super Eagles of Nigeria by scoring two minutes into the second half.

A shot from Youssef Msakni gave the Carthage Eagles their first goal in the game.

The goal came after Msakni’s shot from outside the 18-yard box was poorly parried into the net by Nigeria’s goalkeeper, Maduka Okoye.

Skilful attackers Moses Simon and Kelechi Iheanacho failed to sparkle as they barely got a chance on the pitch this evening in the tough game.

Simon played a major role when the Super Eagles won their group matches against Egypt, Sudan, and Guinea Bissau.

Struck by many absences, including 12 players testing positive for COVID-19, Tunisia proved tougher for the Super Eagles than expected.

While Tunisia have two goals on target, Nigeria had none in the first half.

The Super Eagles were the only side to get the maximum points in the group stage.

Nigeria started the campaign with a 1-0 win over record champions Egypt, followed by a 3-1 victory over Sudan, and concluded the group with a 2-0 win against Guinea Bissau.

Champions in 1980, 1994, and 2013, the group stage maximum tally and entertaining performances are expected to give the Super Eagles the needed morale boost in their hunt for a fourth AFCON title.

Nigeria and Tunisia are meeting for the sixth time at the Africa Cup of Nations, with four of the previous five matches being played in knock-out games. Nigeria are unbeaten in all five (W3 D2, excluding shoot-outs).

Tunisia’s only successful AFCON meeting with Nigeria came in 2004, when they progressed via penalties in the semi-finals after the match finished level, going on to win the competition that year.

However, President Muhammadu Buhari called the Super Eagles of Nigeria and charged them to keep flying in the ongoing African Cup of Nations tournament.

Buhari gave the charge in a video call with the Nigerian squad ahead of their second round match against Tunisia tonight.

Mentioning two of the players, Kelechi Iheanacho and Moses Simon, by name, Buhari urged the Super Eagles to continue making Nigerians happy, not only by winning the second round match, but to eventually lift the trophy.

“You’ve been doing Nigeria proud. You’ve been winning. Please keep on winning. The Federal Government is supporting you, and I say thank you to all the technical crew and the players.. Please keep doing the country proud,” Femi Adesina, presidential spokesman, quoted Buhari to have said.