Soyinka Reveals Why He Visited Sunday Igboho In Benin Republic 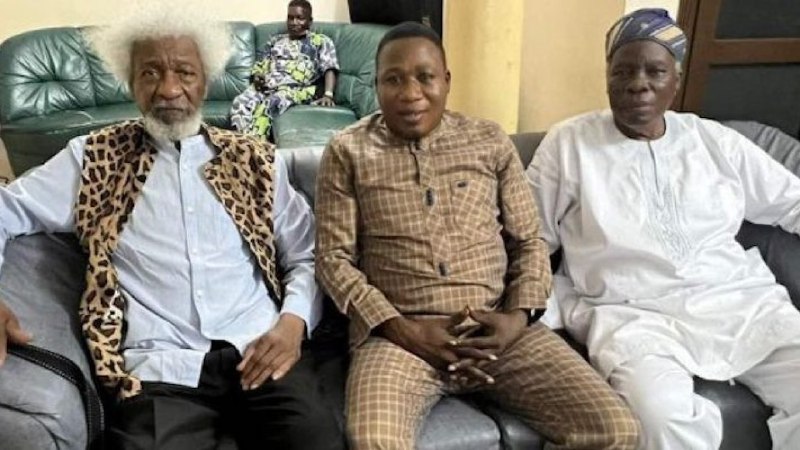 The meeting was place on Sunday in Cotonou, where the Yoruba Nation agitator is now living after being freed from incarceration, according to Anaedoonline.ng.

Banji Akintoye, the leader of the Umbrella body of Yoruba Self-determination Groups, Ilana Omo Oodua Worldwide, and his deputy, Wale Adeniran, are among those attending the meeting.

Soyinka claimed he came to visit Sunday Igboho and to break the Muslim fast with the Yoruba Nation agitator, speaking with his followers at the Seme border.

He went on to say that Ramadan is a wonderful time to demonstrate sympathy with Muslims who had just ended fasting, and that he had hoped to see Igboho.

The dramatist went on to say that he was in Benin Republic to sympathize with Igboho’s plight.

Remember that in July 2021, after the Department of State Services (DSS) designated him wanted for allegedly stockpiling weaponry to destabilize Nigeria, Igboho abandoned his home in Ibadan and fled to the Benin Republic.

Interpol apprehended the Yoruba Nation agitator at a Benin airport on July 19, 2021, as he attempted to board a trip to Germany.

Igboho, on the other hand, was freed on medical grounds after spending roughly nine months in a prison center in the Benin Republic.