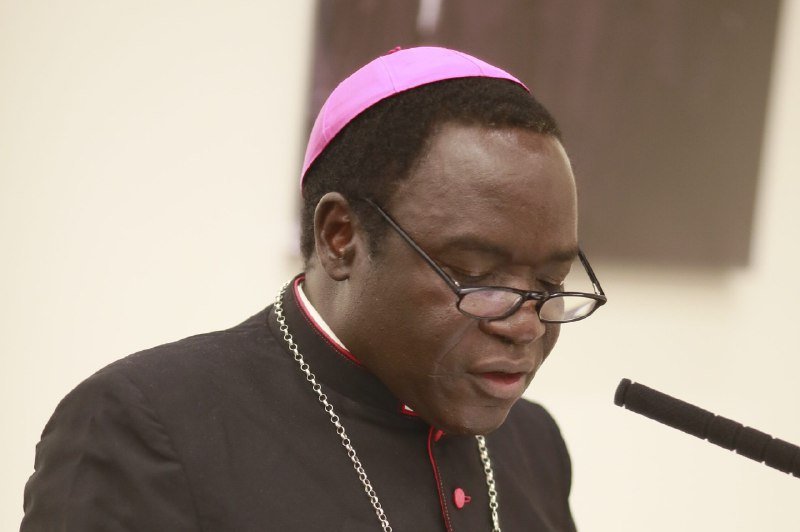 The Sokoto Diocese of the Catholic Church, led by Bishop Matthew Kukah, has been wrecked by hoodlums protesting the arrest of the accused murders of Deborah Samuel.

Bishop Kukah, an ardent government opponent, was reportedly forced to evacuate the Northwest state due to the violence.

Thugs set fire to St Bahkita, which acts as the diocese’s secretariat, according to photographs and videos uploaded online, according to report.

The footage indicated that the church along Aliyu Jodi Road was the identical edifice purported to have been burned down by raging thugs after geo-location.

Mr Kukah told The Gazette he was on his way out of Sokoto when reached. The bishop’s end of the conversation had a windy background, which showed he was on the move.

Witnesses stated the police used tear gas to disperse protestors who attempted to break into the church earlier in the day, but the assailants reassembled when the police vehicles left the area.

Deborah, a 200-level student at the Shehu Shagari College of Education, was lynched and set flames by her Muslim classmates for reportedly disrespecting Islam’s Prophet Mohammed, according to Anaedoonline.ng.

Deborah had been dragged out of her hostel by an enraged crowd, who then beat her to death and burned her body on fire.

LATEST: What Bishop Kukah Told US Congress About Buhari Govt

Later, the Sokoto State Police Command reported that it had apprehended two individuals, with additional murders being sought.

According to Sanusi Abubakar, a spokesman for the Sokoto police, the crowd overwhelmed campus security before murdering the female student and lighting her body on fire.

On Saturday, a pamphlet in Hausa circulated, encouraging Muslims to gather in large numbers to condemn the arrest of Deborah’s accused assassins.

Governor Aminu Tambuwal of Sokoto State has ordered a curfew to bring the situation under control following the eruption of violence that preceded the demonstrations.

2023: How Ganduje Tried To Stop Me From Defecting To NNPP – Shekarau Reveals