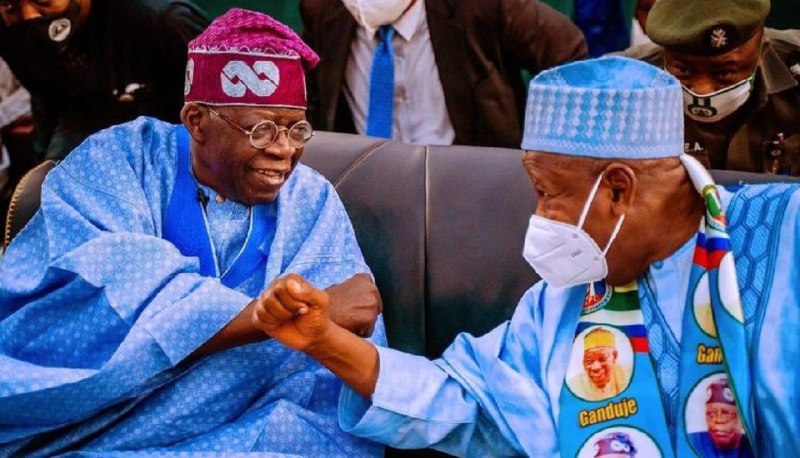 Asiwaju Bola Ahmed Tinubu, the All Progressives Congress (APCpresidential )’s candidate for the 2023 election, reportedly declined the opportunity to select either Governor Nasir El-Rufai of Kaduna State or Governor Abdullahi Ganduje of Kano State as his running mate.

Former governor of Lagos State Tinubu is said to have focused his hunt on either Senator Kashim Shettima or Governor Babagana Zulum of Borno State.

It was heard that Tinubu would return from France and nominate his running mate before the Independent National Electoral Commission’s deadline of July 15 arrived (INEC).

2023 Presidency: Why Power Should Shift To South – Ex-Borno Gov Shettima

All of the potential running mates for the APC presidential candidate were Muslims, and he had narrowed his search to Borno, Kano, and Kaduna states. Despite playing a significant role in Tinubu’s emergence.

An ally of Tinubu told Newsmen that the former governor is expected to consult on who he should pick between Zulum and Shettima when he returns from France.

The source said, “The race for the running mate for Asiwaju has been reduced to just two men. They are the Governor of Borno State, Babagana Zulum, and his predecessor, Kashim Shettima, who is the senator representing Borno Central Senatorial District. All things being equal, the running mate should emerge between these two men.

“Yes, it is true that the Governor of Kaduna State, Nasir El-Rufai, was also being considered. He played an active role in Tinubu’s emergence. His support was one of the surprises among the many people that worked for him. If he (El-Rufai) is picked, he actually deserves it.

“Don’t forget that he is also an influential governor among his colleagues, but I think it is beyond that.”

The source revealed that Tinubu would return from France to face this issue of a running mate once and for all, adding that the APC national leader will likely announce his running mate before Sallah, which is on July 10.

Another source, a member of the House of Representatives, told The PUNCH that the North-East is being favored for the running mate position to divide the votes of the Peoples Democratic Party (PDP) presidential candidate, Atiku Abubakar, who is from Adamawa State.

He said, “The position is likely going to a serving governor either from the North-East or the North-West. But I think North-East is being favoured because the zone has yet to produce a President, and we need to share the votes from the zone with Vice-President Atiku Abubakar, who is from the zone, and he is also the candidate of the Peoples Democratic Party.

“If we pick Zulum, the noise about a Muslim-Muslim ticket would reduce. I think the Christian community would accept him. He is hard-working and might be considered on merit by the people. Christians won’t mind supporting him. His name would resonate all over.”

On the vice-presidential ambition of Ganduje, the source said: “No, he is not being considered again. He wants it, but he is no longer in the equation.”