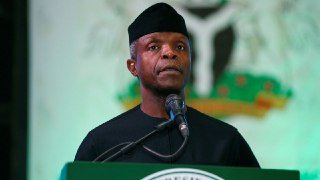 According to APC Chairman Abdullahi Adamu, the event was held to hand the party’s flag to its presidential candidate, Bola Tinubu, who stated that he had given up his seat as Buhari’s running mate to Osinbajo.

While President Muhammadu Buhari is present at the event, Vice President Yemi Osinbajo is not, according to Anaedoonline.ng.

It is unclear why the Vice President is not attending the campaign rally in Jos, the Plateau State capital.

Many people were concerned a few weeks ago about Osinbajo’s absence from the APC Presidential Campaign Council, which is led by President Buhari.

Osinbajo was said to have purposely separated himself from Tinubu’s campaign group for reasons unknown to him.

According to reports, Osinbajo is still furious about losing the APC presidential primary contest to Tinubu.