Emefiele And Governors Will Meet To Discuss…

BBTitans: I Am Bisexual – Nana, Says…

2023 Elections: I Will Deal Decisively With… 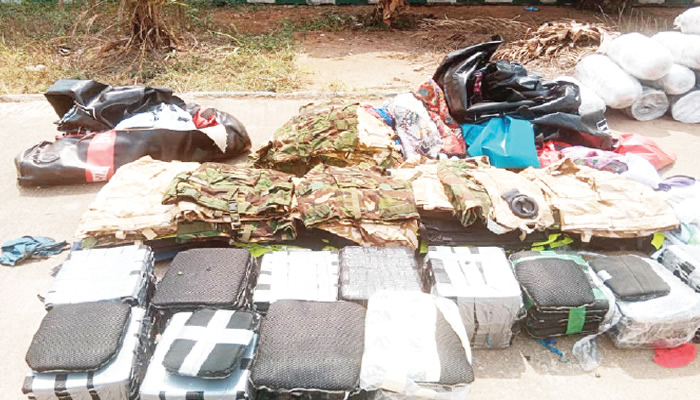 The Nigeria Customs Service’s Murtala Muhammed Airport Command stated it intercepted hard drugs as well as military and police equipment at the airport’s cargo sector.
On Tuesday, Customs Area Controller Sambo Dangaladima told journalists at the command in Ikeja, Lagos, that 162 cartons of illegal tramadol hydrochloride 225 and 250mg, military and police hardware were intercepted at the Skyway Aviation Handling Company.
He went on to say that the medicines originated in India and Pakistan and were transported through Addis-Abeba, Ethiopia.

Dangaladima stated that the pharmaceuticals had a duty-paid value of N13.8 billion.
“These milligrammes (225 and 250mg) are over allowed limitations under current laws,” he stated. The heavy drugs originated in India and Pakistan and were transported to Lagos via Addis Abeba.

Others are five pieces of bullet-proof jackets, 33 pieces of body side ballistic pads, and 105 pieces of ballistic chest plates.
“The suspect connected to this importation could not provide the end user certificate which is the lawful prerequisite for such importation. We have detained the suspects and the military wares, while investigation is ongoing.

“We are very mindful of the fact that 2023 is an election year in Nigeria; the inflow of traffic of these hard drugs that induce our youths to do extraordinary things (when taken) are bound to increase,” he added.
Meanwhile, the command stated that it generated N69bn between January and December 2022.

2023: Comedian, AY Reveals Why Nigerian Celebrities Are Slaves To Fear During...