The History Of Local Made Charm Popularly Known As “JUJU” 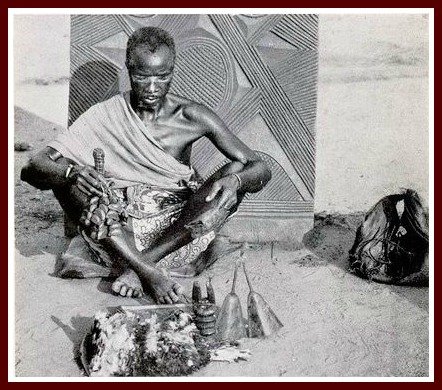 Juju operates on the principle of spiritual contagious contact based on physical contact. The underlying belief is that two entities that have been in close contact have similar properties even after being separated.

It then becomes possible to manipulate one in order to reach the other. Thus, in that context, a person’s hair, fingernails, a piece of clothing, a shoe, a sock, or a piece of a jewel worn by them are all perfect candidates for juju because they are believed to retain the spiritual aura of their owner.

Likewise, it is thought that spiritual similarity can be created by deliberately placing two things in physical contact. The underlying belief is that spiritual assimilation and fusion will take place, with one entity absorbing the qualities of the other. Amulets, charms, and mascots are all common forms of juju.

Usually worn for protective purposes, those objects have been infused with a particular type of energy, and wearing them is expected to create paths and possibilities for the wearer, as well as guard them against ill fortunes and evil spirits.

Specialists with extensive know-how and experience typically create juju. The specialist may be a healer, because juju is commonly used as treatment for physical and spiritual ailments—from healing insect and animal bites to counteracting and neutralizing curses.

However, the specialist may also be a witch or a sorcerer trying to harm someone through the casting of spells or curses, as well as placing juju objects in their close contact so they may become spiritually contaminated and polluted.

READ ALSO: Why Nnewi People Don’t Kill Themselves Or Anyone

For instance, one may be offered spiritually poisoned food or drinks, which is thought to bring about disruption, trauma, or even death if not dealt with promptly and efficiently. A live animal may also be used as a juju. It may be infused with a negative energy and then sent near someone. Once physical contact has been made, it is believed the person will most likely become ill.

Occult practices centre on the presumed ability of the practitioner to manipulate natural laws for his own or his client’s benefit; such practices tend to be regarded as evil only when they also involve the breaking of moral laws. Some anthropologists have argued that it is not possible to make a clear-cut distinction between magic—a principal component of occultism—and regions, and this may well be true of the religious systems of some nonliterate societies. The argument does not hold, however, for any of the major religions, which regard both natural and moral law as immutable.

Those aspects of occultism that appear to be common to all human societies—divination, magic, witchcraft, and alchemy—are treated in depth below. Features that are unique to Western cultures, and the history of their development, are treated only briefly.

The Western tradition of occultism, as popularly conceived, is of an ancient “secret philosophy” underlying all occult practices. This secret philosophy derives ultimately from Hellenistic magic and alchemy on the one hand and from Jewish mysticism on the other.

The principal Hellenistic source is the Corpus , the texts associated with Hermes Trismegistos, which are concerned with astrology and other occult sciences and with spiritual regeneration.

The Jewish element is supplied by the Kabbala (the doctrine of a secret, mystical interpretation of the Torah), which had been familiar to scholars in Europe since the Middle Ages, and which was linked with the Hermetic texts during the Renaissance. The resulting Hermetic-Kabbalistic tradition, known as Hermetism, incorporated both theory and magical practice, with the latter presented as natural, and thus good, magic, in contrast to the evil magic of sorcery or witchcraft.

Alchemy was also absorbed into the body of Hermetism, and this link was strengthened in the early 17th century with the appearance of Rosicrucianism, an alleged secret brotherhood that utilized alchemical symbolism and taught secret wisdom to its followers, creating a spiritual alchemy that survived the rise of empirical science and enabled Hermetism to pass unscathed into the period of the Enlightenment.

During the 18th century the tradition was taken up by esoterically inclined Freemasons who could not find an occult philosophy within Freemasonry. These enthusiasts persisted, both as individual students of Hermetism and, in continental Europe, as groups of occult practitioners, into the 19th century, when the growth of religious skepticism led to an increased rejection of Orthodox religion by the educated and a consequent search for salvation by other means—including occultism.

But those interested turned to new forms of occultism rather than to the Hermetic tradition: on the one hand to Spiritualism—the practice of alleged regular communication between the living and the spirits of the dead through a living “medium”—and on the other to Theosophy—a blend of Western occultism and Eastern mysticism that proved to be a most effective propagator of occultism but whose influence has declined markedly over the last 50 years.

Indeed, despite the 19th-century revival, occult ideas have failed to gain acceptance in academic circles, although they have occasionally influenced the work of major artists, such as the poet Williams Butler yeast and the painter Wassily kandinsky, and occultism in Europe and North Africa seems destined to remain the province of popular culture.

Ten Taboos In IgboLand, No 5 Can Cost Your life