#October1stProtest: Group Urges US, UK, EU To Issue Visa Ban On IGP, DG SSS, Others If…

#October1stProtest: Group Urges US, UK, EU To Issue Visa Ban On IGP, DG SSS, Others If…

A Civil Society organization known as Concerned Nigerians has called on the United States, United Kingdom and European Union to issue a visa ban on the Inspector-General of Police, Director-General of the Department of State Services, Chief of Army Staff and other heads of security agencies if protesters get arrested during October 1 nationwide protest.

The Group made the call on Wednesday, in a statement released by its coordinator, Comrade Deji Adeyanju.

According to Adeyanju, security agencies have criminalised the act of protest, and otherwise constitutional right in an attempt to shield the government of the day from criticism.

Oshiomhole, Ganduje, Bello Others On US Visa Ban List

He said, “It is no longer news that Nigeria is increasingly becoming a repressive state, and the security agencies have surrendered their constitutional responsibility and made themselves a tool in the hands of the government. These security agencies have criminalized the act of protest, and otherwise constitutional right, in an attempt to shield the government of the day from criticism.

“Sadly, the Nigerian judiciary has not been able to stand up and be counted. The citizens are, therefore, left at the mercy of state actors who have developed the penchant for indiscriminately arresting protesters.

“As members of the civil societies get ready to lead a citizen movement against bad governance in Nigeria, tomorrow, it is imperative to call on the United States of America, United Kingdom and the European Union to place visa ban on any member of the security agency who makes himself available to the government of the day, tomorrow, for the purpose of suppressing the protesters. This visa ban should equally be extended to their family members.

“This call is made with deep sense of responsibility, as it appears that the only wedge between state actors in Nigeria and totally authoritarianism is visa ban.” 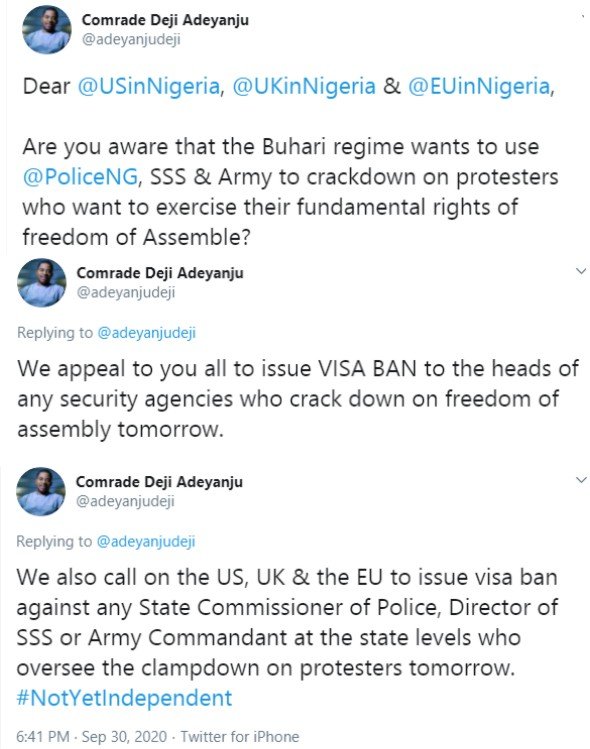