Why Some Nigerian Families Lock Up Children And The Mentally Ill 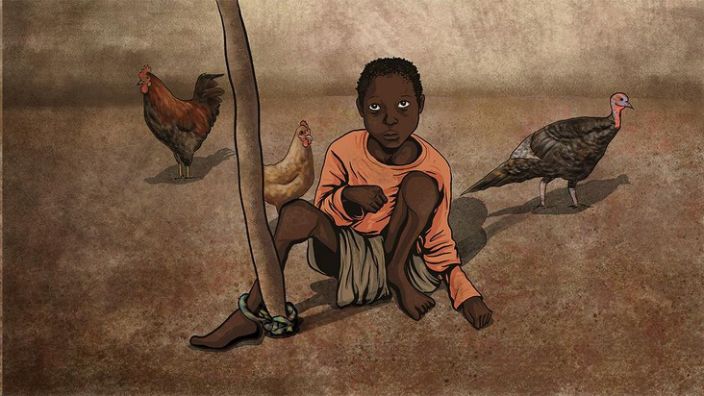 Child
A spate of cases in which people have been rescued after being locked up for many years by their families has shocked Nigerians, and shone a spotlight on both parental neglect and the lack of mental health provision.

Some adults, said to be mentally ill, were found with iron chains around their ankles, and forced to eat, sleep and defecate within the same confined place.

In one case, a 32-year-old man was chained up for at least seven years in his parents’ garage in north-western Kano state.

There have also been reports of children being treated violently while under the care of step-mothers or relatives.

In the most recent case in September, a seven-year-old’s step-mother was arrested after he was allegedly battered to death at his home in Kano, the biggest state in northern Nigeria. The step-mother has not yet been charged, and hasn’t commented.

The boy in the chicken coop
While there are cases of child maltreatment across Nigeria, the recent focus has been mostly on the north, triggered in mid-August by the story of an 11-year-old who was locked up in a chicken coop in Kebbi state, while his father and step-mothers, who have now been charged to court, lived comfortably inside the house.

People were outraged by the image of an unkempt child squatting next to a hen and a turkey.

“After the case in Kebbi, we started getting tip-offs,” said Haruna Ayagi, the head of Human Rights Network (HRN), a non-governmental organisation that has been involved in the rescue of 12 people, seven of them children, in August alone, in Kano state.

“What we noticed was that the children who were abused, did not live with their mothers,” added Mr Ayagi.

In the capital Abuja, two children were rescued from a toilet, where they were allegedly locked up daily by their step-mother until she returned from work.

‘Beaten, burned and starved’
Some of the pictures of the maltreated children looked like images from a Nollywood movie, where the character of a wicked step-mother has become a stereotype most Nigerians are familiar with, though there are of course many step-mothers who take very good care of their non-biological children.

Child
In one case in Kano, a seven-year-old girl was allegedly beaten, burned and starved by her step-mother, according to the authorities.

The girl, and other children rescued in Kano, are now in government care homes, receiving treatment and counselling, while some of the parents and guardians have been arrested, but not yet charged in court.

A 2003 federal law protecting the rights of children gives the state the right to take away a child suspected of being “neglected or ill‐treated”.

But 11 northern states, including Kano, are yet to pass the law, mainly because of opposition to defining a child as anyone below the age of 18 years and therefore prohibiting child marriages that take place in the region. Some Muslims believe that once a boy or girl reaches the age of puberty, they are adults and can marry.

With this dispute blocking passage of the legislation in the 11 states, it makes it more difficult for the state to intervene in a suspected case of ill-treatment or neglect.

Furthermore, polygamy in the north and the ease with which a husband can dissolve his Islamic marriage – he only needs to tell his wife “I divorce you” – means many children do not live with their biological mothers or end up in broken homes where they might be treated badly.

“There has been a normalization of violence against these children, mostly as an act of wickedness and ignorance of basic human rights,” said Imaobong Ladipo Sanusi, head of Wotclef, an organisation that campaigns for the rights of women and children.

She wants awareness campaigns to be held about what constitutes “violence against persons and to understand a clear-cut reporting map”.

The stigma of being mentally ill
The 30-year-old rescued from his parents’ garage in Kano, where neighbours said he had been locked up for seven years for allegedly being mentally ill, could barely walk when he was found.

His legs were crooked at his badly callused knees and too frail to support his severely emaciated body.

In another case in Kano, a 55-year-old man was found locked in a room without a door or window. One of his feet was attached to a large log with a metal bar.

He had been locked up by his family for 30 years because he was mentally ill, and was taken to Rogo General Hospital. A doctor at the hospital, Luis Nweke, said he suffered from “irrational behaviour and psychosis”.

For many years, Nigeria has struggled to look after mentally ill people, partly because of the stigma associated with it.

In some communities, mental illness is seen as a taboo and the mentally ill are referred to as “mad people”, ex-communicated by their families, forced to roam the streets in tattered clothes and eat from rubbish dumps.

“The cases in the north is a reflection of what is happening in Nigeria. This issue of locking up mentally ill people and maltreating them is a widespread issue across the country,” head of the psychiatrists’ union, Dr Taiwo Lateef, told the BBC.

Up-to-date data on the number of people requiring treatment is not available, but with less than 300 psychiatrists in a country with a population of around 200 million, families often turn to traditional healing centres, and faith-based facilities, both Christian and Muslim.

“Because most people see mental illness as a spiritual problem, they seek help from spiritual leaders and traditional healers hoping to exorcise the evil spirit responsible,” said Dr Oluseun Ogunnubi, a consultant psychiatrist.

You may want to watch:

A 2013 report by Nigeria’s health ministry said at least 10% of the population had experienced common mental health disorders. Less than 10% of that number had access to the care they need, according to the World Health Organization (WHO).

Though the lack of mental health facilities is part of a larger problem within the health sector, the fact that there are less than 15 state-run neuropsychiatric centres across the country makes access difficult for many people, especially in rural areas.

But even in areas where mental health facilities are available, the stigma associated with taking loved ones for treatment prevents many families from doing so.

“Most people don’t even want to be seen entering psychiatric hospitals because of the myths and misconceptions around mental health,” said Dr Lateef.

“People live in denial because of stigmatisation. How can it be said that I have mental illness, because they have never accepted it as a form of illness?” he asked.

Erica: I Have Made More Than N85m