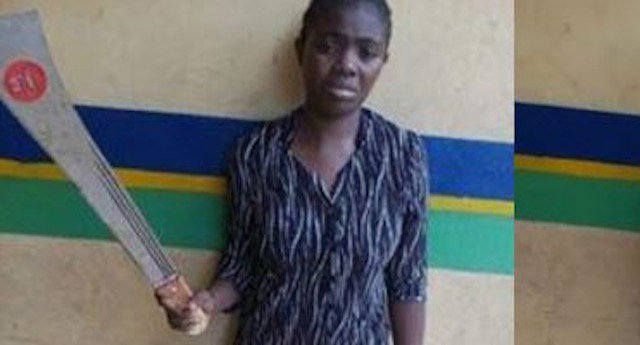 A 26 year-old woman, Hauwa Habibu has been arrested by the the police command in Kano State for using a cutlass to hack her two children to death.

The incident happened at Diso Quarters in Gwale Local Government Area (LGA) of the state, the police said.
DSP Abdullahi Haruna, spokesman for the command said the police received information on Saturday that the suspect allegedly hacked her two children to death.

Haruna said that the victims were identified as Yusuf Ibrahim,6, and Zuhra Ibrahim,3,

” On receiving the information, we quickly sent our men to the scene and found the victims stabbed,” he said.

Haruna said that the victims were rushed to the Murtala Muhammad Specialist Hospital, Kano and were confirmed dead by doctors on duty.

He said that the suspect also stabbed one Aisha Abdullahi, 10, who was her younger sister.

She was rushed to the Aminu Kano Teaching Hospital, Kano for treatment.

Recall, a man identified as Mr. Emeka Ezimmadu who lives in Okpunoeze Uruagu Nnewi has killed his Mother and Two (2), kids.
According to reports made available to Anaedonline.ng, Emeka Ezimmadu who is a Prophet of the Sabbath Church, yesterday night, mysteriously got a cutlass and started matcheting his mother and Four (4) children to Death. Read up story HERE

Why Some Nigerian Families Lock Up Children And The Mentally Ill