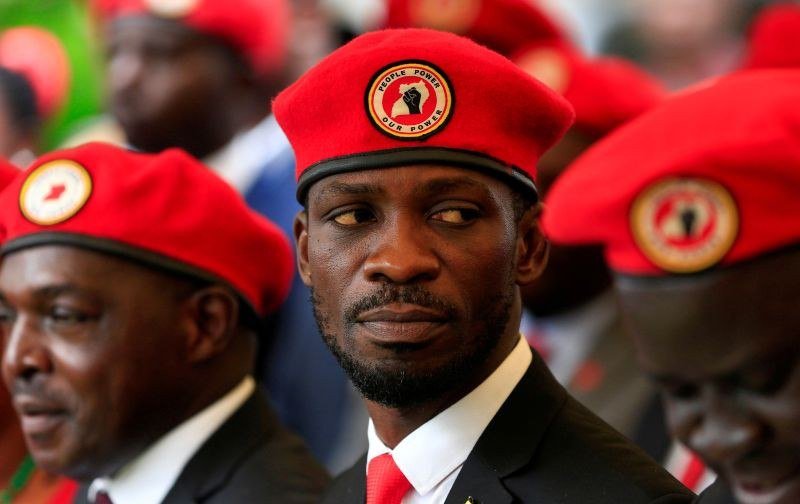 Ugandan pop star and presidential candidate Bobi Wine, whose arrest this week triggered protests that led to at least 37 deaths, was released on bail on Friday after being charged with holding rallies likely to spread the coronavirus.

Authorities have deployed the military across the capital Kampala and surrounding areas to help police forces disperse protesters. They have used live bullets, tear gas, water cannon and arrested hundreds.

Wine, whose real name is Robert Kyagulanyi, was arrested on Wednesday while campaigning in eastern Uganda for allegedly holding mass rallies in violation of restrictions on gatherings imposed to curb the spread of the coronavirus.

See The New Face To Take Over RevolutionNow Protest

“It is Museveni who is supposed to be in this dock for killing innocent citizens,” Wine said after he was charged in a televised court appearance, referring to incumbent leader President Yoweri Museveni.

Police on Friday said the death toll sparked by the protests had jumped to 37.

“What we have seen in the last few days, that is violence, vandalism, looting, intimidation and threats, are crimes that were being committed (against) people who are not pro-NUP,” he said.

“This is not something that we can tolerate.”

Uganda, a nation of 42 million people, is due to hold presidential and parliamentary elections on Jan. 14, with Wine emerging as a serious threat to veteran Museveni, 76, who aims to extend his rule.

Wine has amassed a large following among Ugandan youth, attracted by his bold criticism of the government, often in his lyrics.

Wine has said that being “born hustling and born to hustling parents, raised in the ghettos” meant he could understand the struggles of ordinary, impoverished Ugandans, and he has repeatedly urged Museveni to retire.

His arrest triggered immediate protests in Kampala and other major towns across the East African country. Youths have burnt tyres and other material on roads and erected barriers to block traffic, demanding his release.

Olympics: Minister Of Sports, Reacts As D’Tigress Lose To USA