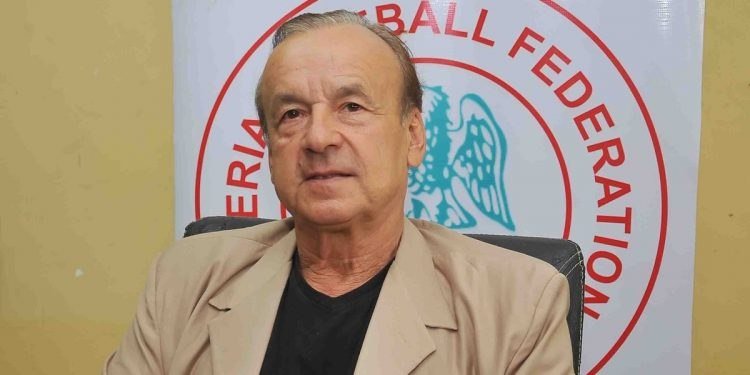 Committed to the objective of getting one of the continent’s tickets to the 2022 FIFA World Cup in Qatar, Coach Gernot Rohr has been making whistle-stops across France and Germany to seek audience with some Super Eagles stars already pencilled for the forthcoming qualifiers in September.

Nigeria is drawn in Group E along with Liberia, Cape Verde and Central African Republic with the Super Eagles expected to host the lone Star of Liberia in Lagos on MatchDay 1 before traveling away to Praia on MatchDay 2 between September 5–8 against the Blue Sharks of Cape Verde.

Rohr, would however, reiterated the clarion made by the Nigeria Football Federation(NFF) President Amaju Pinnick on his recent visit to some England-based Stars that all hands must be on deck as the Super Eagles begin what would be a keenly contested qualifiers towards Qatar 2022.

“We are meeting some of our players,” the German told NationSport. “The President and my first assistant in Germany, and me in France and Germany.”

Fresh from watching the recently-concluded Euro 2020 championship, Rohr said Italy were crowned champions because the coach Roberto Mancini-led Azzurri had the ‘right balance of youth and experience’, even as he enthused that the Super Eagles as in modern football must be dynamic in its approach in order to keep its leading status on the continent.

“Each ambitious team today should be able to pay in different systems, defending and attacking together” the 68-year-old Rohr noted.

Rohr who has qualified the Super Eagles for every major football tournaments including the Russia 2018 FIFA World Cup, the 2019 Africa Cup of Nations in Egypt since he came on board in 2016, said no stone would be left unturned to ensure Nigeria hoist her flag at the first Word Cup to be held in the Middle East next year.