Andy Uba: The Giant of All Times 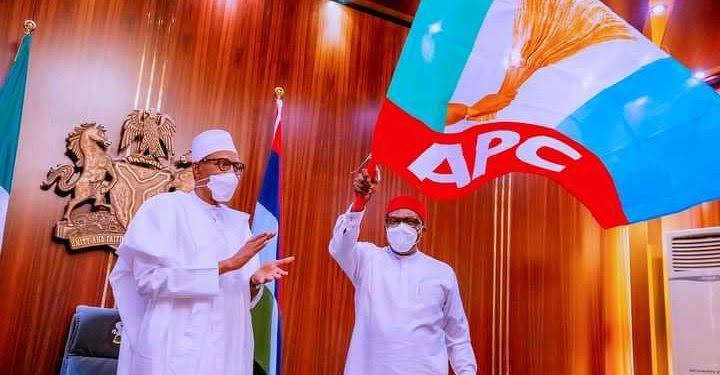 When these hired attack dogs write against Senator Andy Uba and it’s not catching breeze, they resort to cheap blackmails against the All Progressives Congress (APC), his party.

All these are attempts to weigh him down. But, can they? Not at all because I haven’t heard that a locomotive train in motion was ever stopped by mere wishes of intending passengers who missed the time of departure. Andy is focused.

Shortly after it was said President Muhammadu Buhari won’t see Andy as he is against his candidacy in Anambra 2021 Governorship Election, he saw Andy in a grand style. And I wonder what the originators of such premeditated negative propaganda would be doing?

President Buhari even spoke about Senator Andy Uba and I quote: ‘I am happy to formally welcome you. I certainly wish you the best of luck. I’m anxious for your success and will closely follow.’

Senator Andy wasn’t alone as he went with who-is-who in APC, including the Secretary to the Government of the Federation (SGF), Boss Mustapha and Governor Hope Uzodimma of Imo State and other Governors, to mention but a few.

Aside that, he mobilized Senators Stella Oduah and Joy Emordi, among State lawmakers, to join APC in less than one week of his active engagement of stakeholders. He has already won over hundreds of other categories of people in Anambra State. I intentionally avoided calling Senator Andy Uba the giant killer because he indeed nailed opposition voices with his tsunami like political gerrymandering.

And at my ward, in a meeting I hosted stakeholders in support of Senator Andy Uba the other day, APC party loyalists including Prof Paul Orajaka, former Vice Chancellor, Anambra state University, Igbariam; Chief Johnbosco Anaedobe, Uga na Uga and Ichie-Ukwu Chiejina Igbokwe from Umuchu, among others, took turns to eulogize the man Andy.

I was dumbfounded with their own testimonies aside mine about Andy.

That meeting was tactically strategic for Senator Andy Uba as new plans and ideas on the next move emerged, not without a strong mobilization for Old Aguata, Anambra South in particular and Anambra State people in general to go and register voters card.

With the endorsement by Aguata people in Sun Newspapers publicly that they are solidly behind Senator Andy Uba, that everyone in the Council Area is already working for his success, to ensure he emerges the Governor of Anambra State come November 6, 2021,the journey is nearer than we had thought.

I was emphatic when I told them that Senator Andy Uba as the APC candidate was not only strategic but the only candidate adopted by Aguata people because of his requisite experience, capacity, connection and sagacity.

Just Friday September 3, 2021, Aguata people trooped out at Ekwulobia Stadium to welcome Senator Andy Uba after a mammoth crowd welcomed him at Amansea border. That gathering cut across party lines and indeed massive.

It was a solidarity match and a statement was made by Aguata people on where they stand without equivocation on 2021 Anambra Governorship Election.

True to my belief, the Anambra Governorship candidate of APC, Senator Andy Uba, arrived Awka, Anambra State capital, on Friday with a declaration that Anambra became liberated the day President Muhammadu Buhari handed the party flag to him in Aso Rock.

Uba said that to prove the benefit of a State “being at the centre,” reconstruction work on the other lane of the dilapidated Enugu-Onitsha Expressway will begin immediately as the Minister of Works and Housing is on his way to flag it off.

Hear the APC candidate speak: “My first assignment is Enugu-Onitsha road. It is impassable. Work will begin on this road today (Friday). That is the essence of being in the centre. The Minister of Works is on his way.”

I didn’t know he equally is a super singer as he broke into praise songs to God Almighty in appreciation for the love upon him and the love shown him by the mammoth crowd who defied rain to wait for his arrival.

I agreed with him that his enemies and naysayers were defeated the day he was handed over the party flag to fly in the November 6 election by President Muhammadu Buhari. Indeed Uba is coming to liberate Anambra state.

I was glad he gave glory to God and appreciate the fact that Kings are made by God, not man. I am now praying that some black legs won’t sabotage his hard work.

But for us, we are working tirelessly to ensure APC secures victory in the polls. Andy is ready for this battle. Why won’t we support him to actualize it? Why would we rather allow rabble rousers and narcissists the space for more noise remarks against Andy? Good a thing, they are licking their vomit disappointedly.