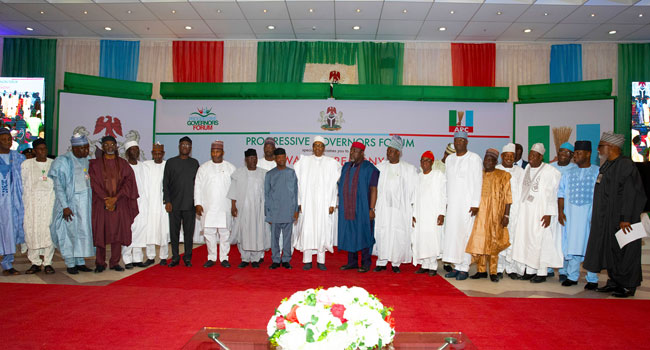 The details of the meeting of Governors of the ruling All Progressives Congress (APC) have emerged.

Anaedoonline.ng had reported the APC governors had met behind closed doors at the Kebbi State Governor’s lodge in Abuja on Sunday night.

The meeting was reportedly held to sort the crisis rocking the party ahead of its forthcoming National Convention.

Speaking to reporters after the meeting, the Chairman, Progressive Governors’ Forum PGF and Governor of Kebbi State, Abubakar Atiku Bagudu, said the forum discussed ways to ensure that the party will not implode.

The Governors resolved to meet with President Muhammadu Buhari over the contentious clause in the Electoral Act Amendment Bill as passed by the National Assembly and which seeks to impose direct primary on political parties.

Atiku Bagudu was however silent on the zoning arrangement for party offices at the national level.

Bagudu dismissed speculations that the APC governors had met with the President to convince him not to assent the Electoral Act Amendment bill, saying the earlier meeting with the President was to discuss the forthcoming national convention of the party.

“I said we are going to meet with our party leader (Buhari) and we appreciate your interest and we will certainly keep you informed”, he stated.

Toke Makinwa Cries Out From Sickbed, Says She Has Done Six Tests