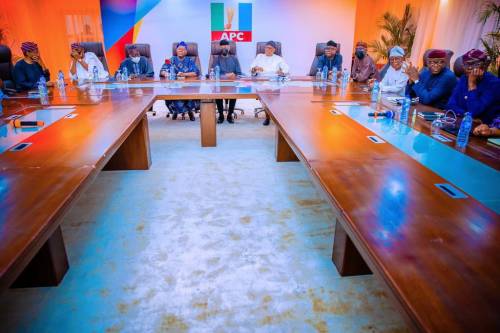 The All Progressives Congress’s presidential hopefuls in the South-West failed to settle on a consensus candidate for the 2023 general elections on Friday.

This comes as Bisi Akande, the former chairman of the ruling party, cautioned hopefuls not to let the South-West miss out on the chance to be the party’s presidential candidate.

Meanwhile, it was reported that the closed-door discussion settled the issue of name-calling and other personal insults.

During the meeting, the hopefuls were instructed to find out who would be the APC presidential candidate.

It was noted that sources close to the meeting stated that the leaders warned the aspirants not to miss the opportunity to produce the President in 2023.

A source at the meeting said, “The issue of betrayal was put to rest as the elders affirmed that everyone who desired to run for any political office whatsoever was not encumbered in any way at all.”

Another source that spoke on the issue of consensus said none of the aspirants responded to the issue of stepping down when it was mentioned.

The source said, “How do you ask someone who has paid N100m to step down? Step down for who? All the aspirants believe that they are popular and can win.

“Funnily enough, the issue of consensus was not listed in the agenda of the meeting. It was also not part of the text messages sent to us for the meeting. The meeting was majorly concerned about the utterances that are already portraying us as being divided and that the zone is behaving as if we have no leaders.

“Yet, there are concerns that a large number of aspirants could put the zone in danger if we go into the primary like that. But nobody was asked to step down for the other.”