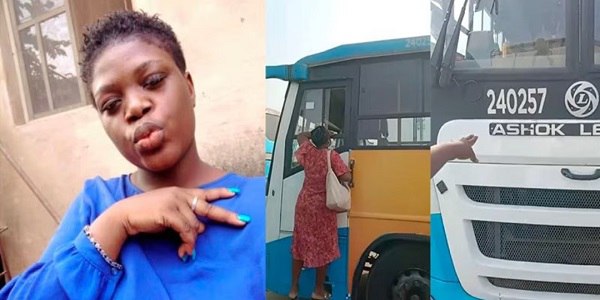 On Monday, May 9, prosecution witness Nneka Maryjane Odezulu testified before the Lagos High Court about how she was violently raped by Andrew Ominnikoron, a BRT driver, in the ongoing rape and murder trial.

Odezulu, a 29-year-old mother and sales professional, told Justice Sherifat Sonaike that the defendant assaulted her from behind after tearing her clothes.

According to report, the witness was cross-examined by Moyosore Onigbanjo (SAN), the Lagos State Attorney General and Commissioner for Justice.

She said the defendant struck her and gripped her neck so hard she couldn’t breathe before raped her.

Odezulu said: “When I entered the BRT, the lights were on, but on getting to Lekki Conservation, Lekki-Ajah Expressway, he stopped the bus.

“He then brought out a drug and took it with water. I did not bother myself because I thought it was a normal medication.

“After that he asked me to come to the front seat, asking why I am sitting at the back.

“Then I stood up and went to sit at the front. Then he started asking me questions: my name, age, where I live; in the process, he brought out his phone and talked about two transactions.

“Afterwards, he said ‘back to our discussion’; and said let’s go and park somewhere and discuss.

“I said sir, I am coming back from work ,tired and need to go and pick my daughter from after school. That was when I noticed that his manhood was up.

“I held the chair, begging while he raped me from behind.

“Then I brought out my phone, wanted to call somebody and record what was happening.

“He was like ‘what are you doing? Who do you want to call?’ He got up from the driver’s seat and collected my phone from me.

“He held on to a small knife and dragged me to the back and said I should pull off my clothes. I refused and we started dragging.

“He said I should remove everything because I was not a baby. He slapped me and held my neck and wanted to strangle me; I couldn’t breath again.

“Then his face changed and he said that if he kills me now, nothing will happen and nobody will know where I am that I should respect myself.

“He pushed me down at the back seat, I held the seats and was begging him. He held the knife, tore my clothes and raped me from the back.

“On getting to my bus stop, I begged him to give me my phone and open the door for me. He started apologising that he was sorry for everything that happened.

“He said I should give him my account number, I told him, I don’t need his money.

“Then he said that I am being stubborn, that I don’t want to give him my account number.

“So I gave him my account number and he sent N3,000 and said I should use it to buy pain killers.

“He asked me to give him my phone number, I gave him before he gave me back my phone and then opened the bus door.

“Then I used my phone to record the plate number from the back.

“Few hours later he called me and said he was sorry. He asked me if I had gotten home, picked my daughter from after-school.

“I did not answer any of his questions. Then I ended the call. He called me back the next day and subsequently, but I did not pick his calls.”

“After the incident, whenever I’m coming back from work and see any BRT bus, I looked inside to see if it was him.

“I have seen him like four times at that Chevron Tollgate, when he passed,” Odezulu added.

When asked if she reported the rape case to the police, she said no, alleging that she had a bad experience with the Jakande cops and that they would have embarrassed her if she had.

In court, the witness wore the striped outfit she wore the day she was raped by the defendant.

It was brought to the court and accepted as evidence as Exhibit 1.

On the other side, the 47-year-old defendant pleaded not guilty to the charges leveled against him.

As a result, Justice Sonaike postponed the case to tomorrow (Tuesday), allowing the trial to proceed.