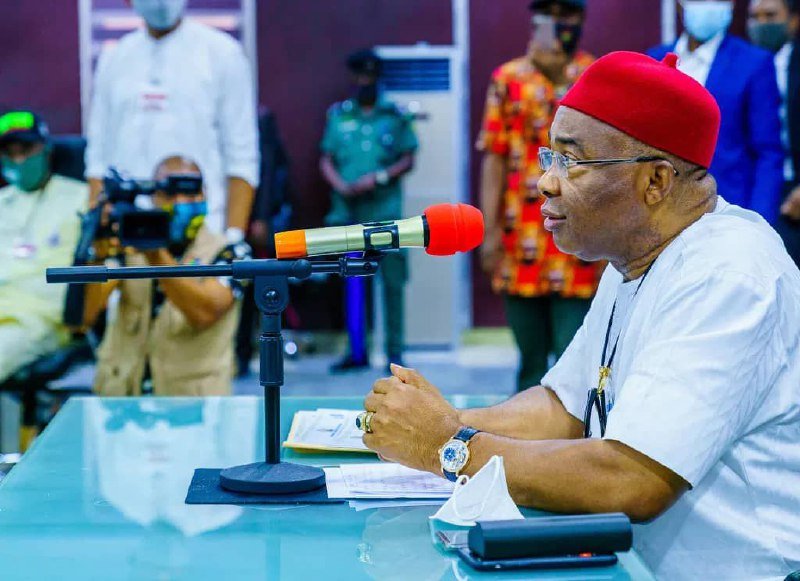 In Imo State, the Peoples Democratic Party (PDP) has accused Governor Hope Uzodinma of being insensitive to the recent wave of insecurity that the state’s residents have been experiencing.

The PDP claimed that Uzodinma had continued to disregard wise advice on how to deal with the country’s insecurity in a statement released on Monday by the party’s state publicity secretary, Emenike Nmeregini.

The opposition party went on to criticize the governor for allegedly dining and drinking exotic cocktails with a small group of All Progressives Congress (APC) lawmakers from the State and other Southeast states despite the mournful atmosphere in Imo caused by the murders by criminals.

When it comes time for elections, the PDP claimed that Uzodinma and the APC can look forward to the people of Imo showing them the door, accusing him of breaking into the government building in January 2020.

According to the report, Governor Uzodinma decided to host a magnificent feast at the Posh Banquet Hall of the Rockview Hotel in Owerri even though the state’s residents are still reeling from the brutal murder of the innocent youngsters of Otulu in the Oru East Local Government Area.

The PDP statement read, ”The I-dont-care, nothing-de-happen attitude of the Governor since the widely condemned, gruesome murder of over 20 innocent youths – his own kinsmen by his Ebubeagu militia has become more glaring that he cares less of 10, 000 innocent lives lost, under his watch, since he broke into the Government House in January, 2020.

“Governor Uzodinma’s reaction to the alarming insecurity in the State, especially the recent Otulu massacre, confirms his tacit complicity to the reign of terror and bloodletting in Imo State.

“It is incontrovertible that this governor has serially refused to welcome and implement wise counsels, strategies and solutions, proffered by the Peoples Democratic Party in Imo State and that of other patriotic stakeholders towards addressing the nagging insecurity and collapse of government in Imo State.

“While the governor has not only shown deliberate lack of empathy to families of the victims of the massacre, he has deliberately refused to extend solidarity to their families on behalf of the government and people of Imo State.”

The PDP however said the dark times brought by the Uzodinma administration on Imo State would soon be over.

“The darkest hours are usually just before the dawn. This too shall pass and Ndi Imo shall be happy again,” the party submitted.