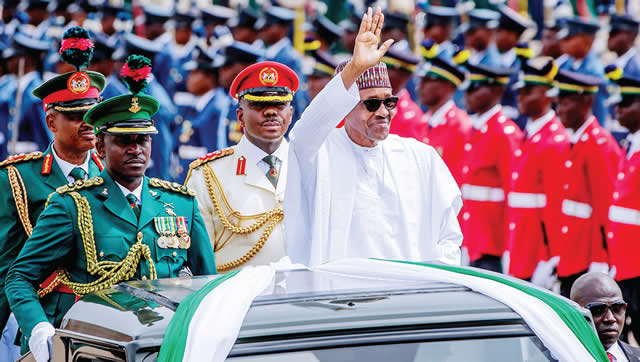 There have been several responses to the terrorist attack on some Guards Brigade soldiers, who are responsible for guarding President Muhammadu Buhari.

According to a previous report by Anaedoonline.ng, the 7 Guards Battalion soldiers were engaged in a suspected terrorist ambush while on routine patrol along Kubwa-Bwari Road in the nation’s capital city.

Many Abuja residents are claimed to have panicked as a result of the incident.

Three soldiers were hurt during an exchange of gunfire that occurred as the terrorists were allegedly making their way to the Nigerian Law School in Bwari.

The three troops who suffered injuries during the incident have been transported to the hospital for treatment, according to one of the military sources cited by The Nation.

Only twenty-four hours had passed since terrorists made threats to kidnap both Kaduna State Governor Nasir El-Rufai and President Muhammadu Buhari.

Nigerians, however, have expressed their opinions on the issue on the microblogging site Twitter.

Boko Haram terrorists walked into Abuja unchallenged and freed 64 commanders yet you are surprised insecurity has worsened around Abuja?

Nobody has been sacked over the jailbreak and no panel to investigate any complicity or sabotage.

In the words of Ayedee, Kudos

If care isn't taken terrorists will soon be in Lagos terrorizing the business community. Lagos is the business and financial hub of Nigeria, if terrorism engulfs Lagos, Nigeria is finished. We become Somalia & Afghanistan. May God forbid BAT thing.

Terrorists milly rocking in Abuja. Parents taking their kids from school for fear of kidnap and my mans getting ready to deliver a speech on security in another country. The clouds you see over Nigeria…you know the rest

The President of Nigeria has Failed us and he should resign.
A military captain was killed yesterday in Abuja by terrorists, the presidents security team. This shows that this terrorists are getting closer and closer to the Seat if power.
They are closing in on the FCT

Terrorist attack on presidential guards 24hrs after treat of President Buhari Kidnap , an indication that sovereignty of Nigeria State is under serious Treat .

The attack comes barely 24 hours after terrorists named President Buhari, others, as their next target.

May our govt not be handed over to terrorists.

So, it has gotten to the point where the terrorists would attack presidential guards? This is see finish!

Barely 24 hours after terrorists in a viral video threatened to abduct Buhari and Nasir el’Rufai, troops of the Guards Brigade have been ambushed by armed bandits in Abuja.