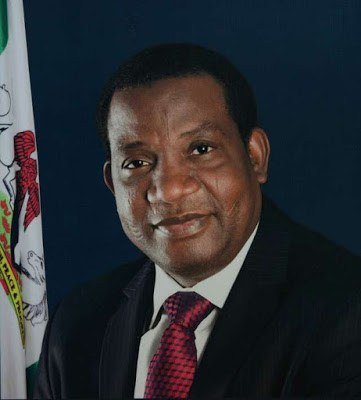 The Governor of Plateau State, Simon Lalong, has been urged to decline the appointment as the Director-General of the Bola Tinubu/Shettima Campaign Council by Engr. Daniel Kadzai, a former National President of the Youth Wing of the Christian Association of Nigeria (YOWICAN) and Co-Chairman of the Interfaith Coalition Conference.

According to Anaedoonline.ng, Lalong was introduced as Director-General of the Tinubu/Shettima Presidential Campaign Council on Thursday in Abuja by the All Progressives Congress (APC) and Tinubu, the party’s presidential candidate.

When discussing the new appointment with Newsmen, Kadzai questioned why Lalong would devalue himself by accepting the position when he was regarded deserving enough to run for president.

If Lalong accepted the position, Kadzai said he would not be permitted to campaign in churches or meet with Christian stakeholders.

He said: “When a political party is pushing candidates of the same faith on the basis that they’re using it as a strategy to win elections, then you should know that this party is trying to divide the country.

“And in a fragile nation like Nigeria where trust has long evaporated, where are we headed? We’re talking about agitations here and there and you’re now flying a Muslim-Muslim ticket.

“We have condemned this and we’re celebrating our Christian brothers, who out of solidarity with their fellow Christians, dumped the APC over Muslim-Muslim ticket.

“We are calling on more Christians to leave that party. Leave the party and look for an alternative. Lalong should sit up. If they cannot find him competent enough to be the vice president that we have agitated and called for, there’s no need for him to come in as the Director-General of Tinubu’s campaign. ‘Monkey they work, bamboo dey chop’.

“He’ll now campaign for them to get our votes? We are passing this soft message to Lalong. In the interest of his faith, he should decline and let them go and look for one faithful northerner who’ll be their campaign DG.

“Not Lalong because we’ll not allow him to hold meetings with any of our leaders. We’ll not allow Lalong to come near our churches to campaign because they have relegated us for a long.

“We celebrate Atiku Abubakar for the fact that the Chairman of his campaign team is a Southerner and a Christian and he has appointed a Northern Christian, Dino Melaye, as a spokesman.

“I want to congratulate Atiku Abubakar for appointing our brother, principled and trustworthy northern Christian, Barrister Daniel Bwala, who has been on air to preach unity.

“Despite the darkness covering the APC, Daniel had tried to lighten their path but at the end of the day, they betrayed him. So for Atiku Abubakar to give Daniel Bwala the befitting office coming 2023, we celebrate him. We also call on Daniel Bwala to carry out his duty diligently.”