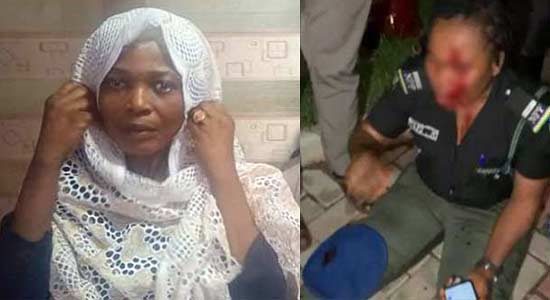 Zainab and Rebecca were detained, according to a statement released on Thursday by Force Public Relations Officer Muyiwa Adejobi.

At her home in Garki, Abuja, on Tuesday, Zainab, a human rights activist and lawyer, beat her orderly.

The orderly refused to violate professional ethics by performing menial and domestic tasks at her home, which led to the attack.

On social media, a video of Inspector Teju in agony with a bleeding face is trending.

Adejobi declared that the IGP has ordered the arrestees to be prosecuted right away.

The preliminary inquiry “shows overwhelming proof of guilt on the part of the Professor and her domestic employees,” the official stated.

The IGP also gave the investigative team instructions to make sure that the fleeing suspect was apprehended and made to face the consequences of his actions.

“Prof. Zainab name-drops the IGP, his family members, and other officers in the top hierarchy of the Force. She has no acquaintance with the Police in any form as erroneously peddled on social media”, Adejobi added.

Baba removed the police officers who had been assigned to the scholar after expressing shock at the idea that someone who calls themselves an advocate for human rights had violated the rights of another person.