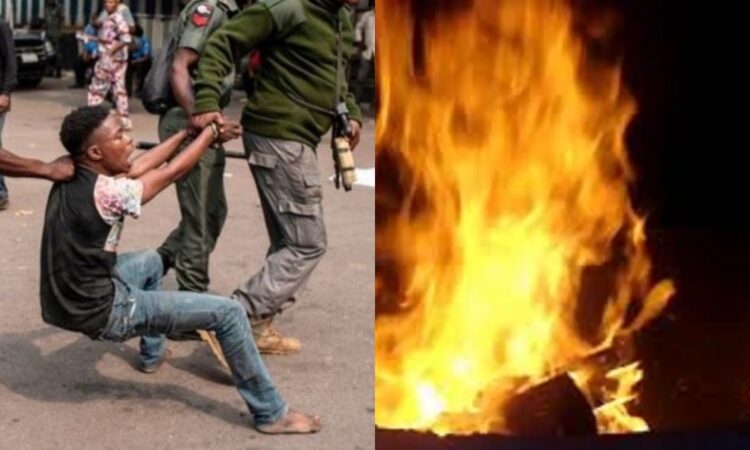 The spokesperson of the Lagos state police command, Bala Elkana, has confirmed the arrest of a teenager for allegedly responsible for the death of his older sibling following an argument that ensued between their mother and the deceased.

It was reported that the culprit whose name is revealed as Chima had angrily set his sibling on fire while reacting to her actions towards their mother who was cautioning her for laying around with men.

We understand that the incident which happened at Ojo, a community in Lagos State about two weeks ago left the family and residents in tears after the culprit angrily hits sister with petrol gallon which burst and resulted to an inferno, leading to her death.

Top Nollywood Actor Arrested For Allegedly Stabbing His Neighbor To Death, See Why

The unforeseen incident had started after the deceased was chastised by her mother on the account that she sneaks out from their apartment to sleep with men.

According to reports, the young lady who is only 20 years of age got infuriated with her mother and landed a slap on her face. Chima who could not hold his anger reportedly look around and get hold of a gallon which contained petrol and smashed his sister with it.

Unfortunately, the gallon burst and the content bathed Victoria and she instantly caught up with fire.

We learnt that residents swung into action and rushed her to a nearby hospital at Okokomaiko but was rejected by the hospital. She was, however, taken to Alimosho General Hospital, Igando where she was finally confirmed dead.

Man Allegedly Hangs Himself With A Towel In His Room

Reports gathered that Chima after seeing the scene that follows his action tried to escape but was restrained by residents who later handed him over to the police.

Meanwhile, their mother while trying to put off the fire on her daughter’s body also got burnt severely.

On his part, Elkana disclosed that the young man has been arrested and transferred to the State Criminal Investigation and Intelligence Department (SCIID) Yaba for further investigation.